BOLIVAR, Mo. – As the United Nations hosts the International Day of Women and Girls in Science on Feb. 11, Southwest Baptist University also celebrates the women – both faculty and students – working and studying in the Science, Technology, Engineering and Mathematics (STEM) fields. 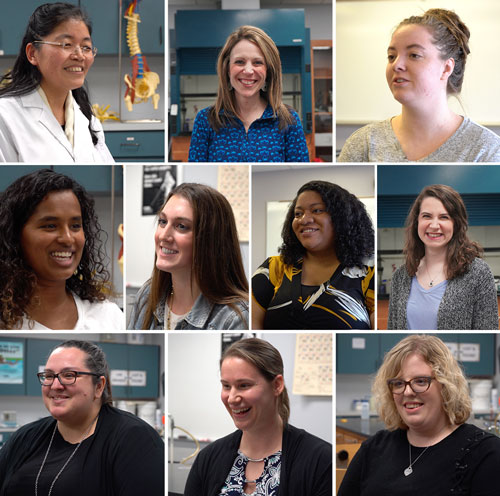 “Our faculty in the STEM areas are dedicated to teaching and inspiring the next generation of women in STEM, no matter which field they pursue,” said Dr. Lee Skinkle, provost of SBU. “Our students are in great hands, and we know they are being equipped for successful futures.”

The United Nations’ website states that less than 30 percent of researchers worldwide are women, and according to UNESCO data from 2014-2016, only around 30 percent of all female students select STEM-related fields in higher education.

“Everyone has their own perspective to bring to any field that they go into,” said Dr. Danielle West, assistant professor of chemistry at SBU. “And, I don't think that being a woman neglects going into the STEM field. Women are a minority (in STEM), but that doesn't mean that we're any less impactful.”

Meilani Conley, instructor of computer and information science at SBU says it is crucial to have a diverse perspective, no matter the field.

“A lot of STEM areas, like mathematics and engineering, started with women,” Conley said. “When men were away at war, women were actually doing the differential calculus and all of that to make computers run and to understand those processes. And, some were even pioneers in inserting computer programs and programming languages.

“It's important for all of us to have a diverse perspective in the STEM fields. I think that there's a creativity that comes with women, that men maybe have a different perspective on.”

“There are no aspects of any field that are closed off to women,” Whetstine said. “Up until a few years ago, STEM was more of, not a roadblock, but a narrow path.

“Having that path open to women and making all women know that path is open, is important.”

And, those ideals aren't lost on the students at SBU.

“I think it's important for women to study everything,” said Megan Worthington, a biochemistry major – one of SBU's newest programs. “In the STEM field, especially, it's important because knowledge is power. Being a woman and being a STEM major, it's hard. But, if you work hard and you want to do it, you can be a top dog. It's important to do what you're good at and work hard at it, whether that's STEM or something else.”

Most of the SBU women in STEM knew from an early age they wanted to pursue these areas.

“I intrinsically enjoyed science,” said Dr. Hillary Glauser-Patton, instructor of biology. “I was a curious child and enjoyed experimenting and asking questions. I had a lot of great role models in the sciences, and my interest in it was encouraged so I continue to pursue it and continue to enjoy it.

“One of my mentors as a child was our neighbor and my pediatrician, who's a good friend. She's 83 this year, and she was the only female in her medical school graduating class at the University of Kansas that year. So, a lot of the stories that I heard growing up came from her experiences.”

One of Glauser-Patton's students said her love for learning is what eventually drew her to STEM.

“I was young and wasn't really sure that science was for me,” said Molly Liggett, a biology major, “But, I love to learn and I loved getting to research and discover things, and I had always done that from a young age. I started looking into the medical field because I loved the intricacies of the human body. So, I decided to major in biology, and I've loved it.”

For students Mikayla Becker and Hannah Deeke, the interest in STEM was always there, they just didn't know what direction it would lead them. 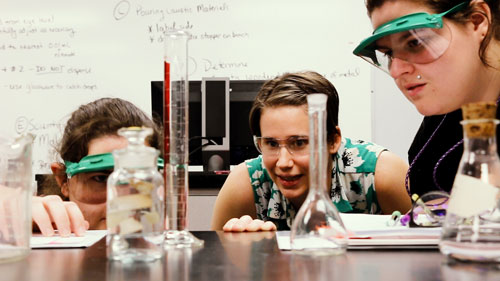 “I just knew from a very young age that I loved math and wanted to do something with it in the future,” said Becker, a forensic chemistry major – another new program at SBU. “And as I grew older, it turned into more the science side than math. But, I could have told you from the age of 5 that I wanted to be a math teacher.

“Now, I want to work in a crime lab. It's a fun and applicable way to do chemistry. It's very hands-on.”

Deeke, a biology/pre-physical therapy major, has always had a heart to help others.

“That's why I want to go into PT, so I can help people,” Deeke said. “I hope to go one day on medical missions overseas, so I can broaden that perspective and get PT to other countries that aren't as fortunate to have the proper medications or access abilities.”

Even though the global numbers may show otherwise, Conley says she has seen growth in her department, both as a student and a teacher at SBU.

“When I started in this program at SBU, I was the only female in my class, so that was a little daunting,” Conley said. “But, we've grown our department significantly and about 25 percent or more are women. It's really exciting to see that growth just within our computer information science department, which is rare, because it's higher than the national average of women in technology, specifically. I've seen the shift to more women being exposed to it younger. They don't get pushed away from pursuing technology in computer science.”

Allison Baker, a computer information science major, has been encouraged by the upward trend.

“When I was in high school, it was just getting introduced in general,” Baker said. “So, I think it was really good to be able to see, coming here to SBU, that they have a really high ratio of girls to guys.”

While the UN's International Day of Women and Girls in Science is designed to bring awareness to the gender gap in STEM, SBU has never wavered in its support of its female faculty and students in those fields.

“I've never really felt like a female scientist; I was just another colleague,” Whetstine said. “I was just another person that they wanted to succeed, because if I succeed, then the department succeeds. My department, my chair, have been incredible with the support and help along my career.”

“One of my favorite things has been the opportunity to think of an idea and to execute it,” Glauser-Patton said of a cell tissue culture lab that wasn't at SBU when she came. “I had some ideas and got to see them fleshed out – this lab, things like that, have been opportunities to implement our giftings in a way that directly impacts students.”

Another opportunity these women are encouraged by is the integration of faith and academics.

“I think that's the best part of SBU,” said Dr. Renfang Taylor, assistant professor of biology. “That combination (Baptist university and science), you are free to express your faith. It is true because the body is so fascinating. Like the Bible says, we are fearfully and wonderfully made.”

“I actually wanted to always combine technology and faith,” Conley said. “I didn't know what that looked like when I was in college, but God has brought that full-circle now and all my experiences brought me to this place. You don't have to sacrifice your academic rigor for your faith. They both go together perfectly. And, that's how God designed it.”

Having mentors such as these at SBU are crucial to the growth of women in STEM.

“The women in STEM that I know are the women that I look up to the most,” Worthington said. “From my teachers here at SBU, which are the best mentors I've had, to my mom being in STEM, they are the hardest-working, most caring people that I've ever met. They've worked hard to be here, and they have worked so hard so they could teach me all these things that are incredibly hard for me to learn.

“They have gone through the trials and tribulations and are here to be able to mentor me and tell me that I can get through it. I would say women in STEM are incredible.”