BOLIVAR, Mo. – Southwest Baptist University Athletics formally inducted the three newest members of its Hall of Fame and honored an alumna for service during Hall of Fame festivities on Saturday, Dec. 4 in the Meyer Wellness and Sports Center on the Bolivar campus.

Jim Grabowski ’08 (Basketball), Emma Shell ’14 (Track and Field) and Jack Burrell ’85 (Baseball) were honored for their contributions to their sports and the SBU community, while Dr. Louise Wimberly was recognized for her impact on SBU Athletics with the Bearcat Service Award. 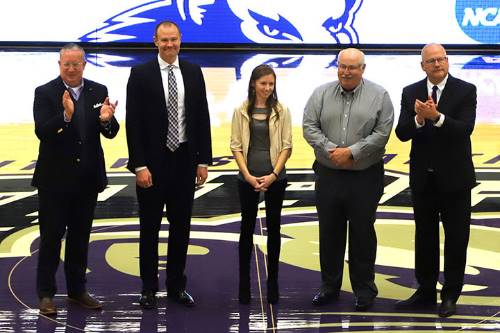 The Hall of Fame Class of 2021 also was recognized during the men’s basketball game against Missouri S&T.

“Our Hall of Fame induction ceremony is my favorite event of the entire year; it’s one of our marquee events,” said Mike Pitts, SBU’s director of athletics. “It’s a time when we share memories, talk about great stories and recognize individuals and teams for great accomplishments.”

The Bearcat Service Award, which was established in 2015, recognizes special friends of the SBU Bearcats who, over the years, have made a meaningful impact on the Bearcat family.

Dr. Louise Wimberly, the first female recipient of the award, has been connected to Bearcat family for more than 70 years. A 1949 graduate of Southwest Baptist College and Life Service Award recipient in 1996, Wimberly played on the women’s basketball team and was a member of the band. She is described as an avid fan, attends all of SBU’s home basketball games and attends its 6th Man luncheons.

“If there ever was a fan who bleeds purple, it’s Dr. Louise Wimberly,” Pitts said.

SBU Women’s Basketball coach Kelsey Keizer shared about Wimberly, who was unable to attend the event.

“While I may be two-times Louise’s size in height, she definitely has two-times my heart,” Keizer said. “She comes to every home game and luncheon every week, and she definitely packs a punch. She comes with a lot of energy, a big smile and a quick wit.

Emma Shell ’14 (Track & Field) was a highly decorated track and field athlete at SBU. She broke seven records in four seasons as a Bearcat and holds the second-best program times in the 200- and 400-meter dashes. Shell also was a three-time All-American, a five-time USTFCCCA All-Region performer, a two-time USTFCCCA Academic All-American and a seven-time All-Mid-America Intercollegiate Athletics Association (MIAA) honoree, and joins her twin brother, Bill, as a member of SBU’s Athletics Hall of Fame.

Beth (Luckel) McDaniel ’16, ’18, who was a teammate of Shell’s, introduced her on behalf of Shell’s coach, Corey McElhaney.

“SBU Track and Field has done some amazing things and that progress can be credited to some very special athletes who paved the way. Emma Shell is one of those athletes who carried SBU to the national stage with humility and grace.”

Shell, who could be described as a reluctant champion, said she considered quitting the sport during her sophomore year at SBU. She credited her coaches, close friends and teammates, and the classes of athletes who came in behind her for keeping her going.

“When you have people looking up to you, it pushes you to be a better teammate and a better athlete all around,” Shell said. “So, I would tell the scared freshmen who came in after me, that looked up to me, I hope I was able to do as much for them as they did for me.”

Jack Burrell ’85 (Baseball) turned down multiple NCAA Division-I offers to play at nearby SBU, where he was a hard-throwing right-hander and starting pitcher for the Bearcats for three seasons. An injury sent him to the bullpen, moving him into a relief role his senior season. More recently, the Humansville native was honored by the Missouri Sports Hall of Fame in 2015 as a recipient of the Diamond 9 Award, which features the top baseball and softball players in Missouri. He currently is the special project manager of Ozarks Coca-Cola Dr Pepper Bottling Company.

SBU Baseball coach Chris Martin said he has learned two things from Burrell over the years – the value of family and hard work.

“There are two things that I’ve learned from Jack that I try to do in our program,” Martin said. “Jack would have company meetings at 6 a.m. in one of SBU’s conference rooms. One day, I asked Jack’s son, Wes, why he had these 6 a.m. meetings. Wes ’12 said Jack would have meetings early so that his employees could be off in the afternoon to be with their families and their kids’ after-school activities.

“I’ve never forgotten that, and that’s how I’ve wanted to be. We’ll practice and do everything at 6 a.m. and try to leave our evenings off for our guys.”

The other bit of inspiration Burrell provided Martin was his family’s expectations for the SBU Baseball program.

“Jack said, ‘We don’t expect you to win a championship, or care how many games you win, but we really want you to value hard work and build the program back on the culture of hard work,’ Martin recalled in a conversation with Burrell. “‘And make sure that your guys and my son know how to work when they leave your program.’ I think about that often. I really try to strive to make sure that our guys know how to work.”

Choosing to stay close to home to play baseball is a decision Burrell has never regretted.

“This university has always been a very caring university,” said Burrell, who also met his wife, Pam, at SBU. “Students come first here. Professors care about their students and do what it takes to make that student be a better citizen.

“SBU has opened many doors for me as I’ve moved through life. It’s amazing how many people you meet in the United States and across the world that have some connection to SBU.”

Jim Grabowski ’08 (Basketball) helped the Bearcats to a 27-5 record in 2005-06 and to a 22-8 finish in 2007-08 (his first and final seasons at SBU). Both of those seasons resulted in Mid-America Intercollegiate Athletics Association (MIAA) championships and NCAA Tournament appearances. Grabowski earned NABC All-Region second-team honors during his senior season (2007-08) and was a first-team All-MIAA selection. He also ranks in the top 10 in five SBU career categories. For his career, Jim pulled down 536 rebounds, blocked 45 shots, scored 1,149 points on 434 field goals, averaged 12.8 points per game and shot 45.4 percent from the field. After SBU, Grabowski took his skills overseas where he played professionally for three years – one year in Ireland and two in Portugal. His team won the championship his last year in Portugal.

Former SBU President, Dr. C. Pat Taylor, recalled one game in particular that represented the type of player Grabowski was – “a gamer.”

While competing in the Mid-America Intercollegiate Athletics Association, SBU was trailing Truman State University by three points with seconds to play. The ball was inbounded to Grabowski who launched and banked in a half-court shot to tie the game and send it to overtime.

“I always questioned whether or not that basket should have counted,” Dr. Taylor said. “I knew he got the shot off in time, but it banked in and I did not hear Jim call ‘bank.’ We were all thankful that the bank was open that Saturday afternoon.

“In the overtime, Jim had several baskets, blocked a key shot and grabbed some crucial rebounds and we killed them in overtime, thanks to Jim making that 3-pointer. That’s the kind of player he was; he was a gamer.”

“Jim was everything you wanted in a player,” Guiot wrote. “He strived to be the hardest working player on the team every day. He always wanted to see his teammates be successful and he set an excellent example in the classroom for all the student-athletes at SBU. He was a fun player to coach because he was willing for me to push him to get better. So, Jim Grabowski going into the Hall of Fame is not a surprise to me or anybody who watched him play basketball. It’s an honor to be a part of Jim’s career and his life.”

As a member of SBU’s University Advancement team, Grabowski also was a key player in the annual “Highway 13 CatFight” fundraising challenge between SBU and Drury University. Dr. Taylor recalled a fun memory from one of the promotions.

“Someone came up with the idea of putting the Bearcat mascot costume on Jim, he’d go in and slam dunk the ball,” Taylor said. “As soon as he did, they stopped the camera, he took off the costume, I put it on and then it looked like I dunked the basketball. Needless to say, we definitely won the challenge that year.”

Grabowski said he couldn’t have asked for a better experience than he had at SBU and that two phrases come to mind when he thinks of SBU.

“It’s not possible to graduate, especially during Dr. Taylor’s time, without knowing the mission statement,” Grabowski said. “One particular part of that statement is ‘community.’ For me, this is the community I grew up in, Bolivar is, the university is, and I’ve always followed SBU Athletics. To get to play and represent the community – the town and the university – meant so much to me. To see all of you here, to see the investment you have made in my life – pastors, teachers, physical therapists, coaches, friends – it was an honor to play and represent you all.”

Grabowski also recalled a verse that was in the team’s locker room and one Guiot would reference often was Proverbs 27:17 – “As iron sharpens iron, so one person sharpens another.”

“I am very grateful for all the people in my life,” Grabowski said. “I’m very appreciative of the experiences I’ve had and the teams that I’ve been part of, and I really feel undeserving to have been around so many great people in my life. I’m grateful for my coaches that got me in position and ready for college, and of course, my college coaches, for getting the best out of me and challenging me and putting together good teams. I don’t think I would be standing here today if I wasn’t part of good teams and other hall-of-famers who spent so much time investing in me. I truly feel honored and humbled to receive this and appreciative for all the people who invested in me.”