As a senior at Bolivar High School, Jim Grabowski thought he wanted to go away to college to continue his academic and athletic career. But he soon discovered that everything he wanted was right in his own backyard.

“Growing up in Bolivar, like many high school students, there is a desire to move away from home to try something new,” Jim said. “In my freshman year of college, I came to realize how special Bolivar and SBU are.”

Once he returned to Bolivar, he quickly made his impact felt on the Southwest Baptist University men’s basketball program as one of the team’s most dominant forwards, earning him induction into the SBU Athletics Hall of Fame as a member of the Class of 2021.

During his first and final seasons at SBU, Jim helped the Bearcats to a 27-5 record in 2005-06 and to a 22-8 finish in 2007-08. Both of those seasons resulted in Mid-America Intercollegiate Athletics Association (MIAA) championships and NCAA Tournament appearances – two of his favorite memories at SBU.

“My senior year, we clinched the regular-season MIAA championship at home against UCM (University of Central Missouri), which was one of our biggest rivals during our career,” Jim said. “It felt amazing cutting down the nets at home with our fans. I also gained a deep respect for UCM coach Kim Anderson, for sticking around after the game to congratulate me and shake my hand in the hallway outside of the locker room.

“My sophomore year, we clinched the MIAA championship on the road. We drove home and were greeted late at night with tons of fans outside the gym.” 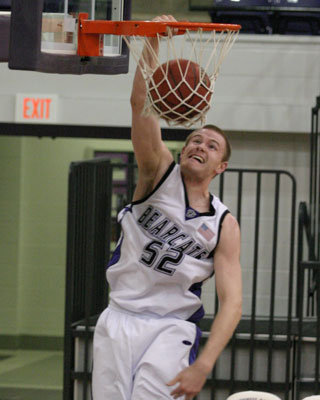 During his senior season (2007-08), Jim earned NABC All-Region second-team honors and was a first-team All-MIAA selection. He also ranks in the top 10 in five SBU career categories. For his career, Jim pulled down 536 rebounds, blocked 45 shots, scored 1,149 points on 434 field goals, averaged 12.8 points per game and shot 45.4 percent from the field.

“Hosting the NCAA Tournament during my sophomore year was very special,” Jim said. “During one of our games, Sheldon Pace threw me an alley-oop dunk pass from half court. I’ve never heard a gym so loud. Those briefs moments are the ones that stick with you for a lifetime.”

The connections Jim made through SBU Athletics both inspired him and helped him grow as a student-athlete – and beyond.

“Growing up in Bolivar, I have a connection with all of the teams I watched,” said Jim, who enjoyed a three-year professional basketball career in both Ireland and Portugal after college. “And accordingly, I owe a lot to the coaches who coached those teams.”

Coaches like the late Jerry Kirksey, whose teams Jim watched as a kid; Darin Archer ’91, whose teams Jim got to know through pickup games while he was still in high school; Lynn Nance, a coach who was a mentor to Jim; and Jeff Guiot, who was a huge reason Jim decided to return to Bolivar and attend SBU.

“He challenged me as a basketball player to be more confident and assertive,” Jim said of Guiot. “I would not have the honor of entering into the Athletics Hall of Fame if it were not for his help in my career. He also challenged me to become a better man and Christ follower. I am grateful for Coach Guiot and all of the assistant and graduate assistants that were part of my time at SBU.

“Athletics allowed me to connect with others on campus and many more of the SBU family outside of campus. Since finishing my career at SBU, I have had players from other MIAA schools tell me that SBU was the toughest place to play. We had incredible fans. Having everyone else from the Bolivar community and SBU family pack out the stadium made for a very special place. Since then, I stay in touch with many people that I met through basketball. On a personal note, thank you for making my time at SBU so special.”

Once he transferred back home, it was evident to Jim he had made the right decision.

“I transferred after one year from another highly reputable university and at least two things were very noticeable,” Jim said. “First, the emphasis on faith. Every class that I had at SBU integrated core Christian views in it. I am grateful for all of my professors making every effort to do so. Second, the emphasis on teaching. Professors at SBU truly care about preparing students to become servant leaders in a global society.”

The foundation of SBU’s mission statement is what makes the university unique, said Jim, who earned a Bachelor of Science degree in economics and finance from SBU, an MBA from Missouri State University, and currently is a Ph.D. candidate in strategic management at the University of Kansas.

“SBU is Christ-centered,” Jim said. “Having attended three different secular universities, I can confidently state that SBU is proudly and clearly distinct in its approach and dedication to offering students a Christ-centered education. It is a caring academic community. Where else would you find faculty willing to ride a bicycle across town to offer some tutoring? SBU prepares people to be servant leaders. I look at some of my fellow business school cohort who are successful attorneys, leaders of banks, leading entrepreneurial ventures, and so much more.

“And this all is being done in a global society. I got to live in Europe for three years and hope I made, at least in a small way, an impact on the lives of people I got to know. Even in the world in which we currently live that limits global travel, I am confident that there are countless SBU alumni figuring out ways to connect with others throughout the entire world.”