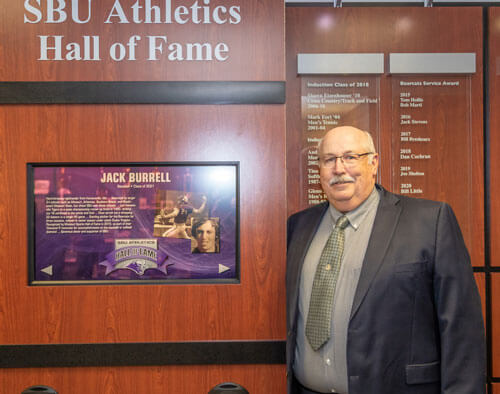 A top pitching prospect coming out of nearby Humansville High School, Jack Burrell ’85 led the Tigers to a runner-up finish in the 1980 state championship. College programs that pursued Jack included NCAA Division-I schools such as Missouri State University, the University of Missouri, the University of Arkansas and Southern Illinois University.

“SBU was close to home and I was still able to play against high-level competition, including Oral Roberts University, Arkansas, MSU, Southern Mississippi and many other Division-I teams,” Jack said of his decision to play for and attend SBU. “I knew it was a very caring and Christian environment both at the University, within the community and the coaching staff. I wanted to be able to play in front of local fans.”

Now a member of the 2021 SBU Athletics Hall of Fame class, Jack was a hard-throwing right-hander who was a starting pitcher for the Bearcats for three seasons. An injury sent him to the bullpen, moving him into a relief role his senior season. More recently, Jack was honored by the Missouri Sports Hall of Fame in 2015 as a recipient of the Diamond 9 Award, which features the top baseball and softball players in Missouri.

Jack has many fond memories of his time as an athlete at SBU. 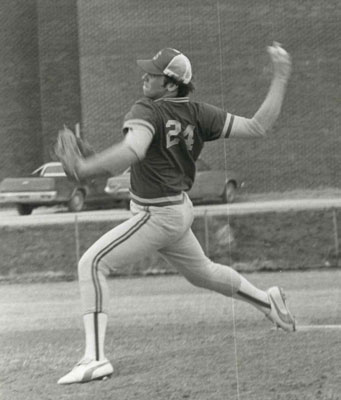 “I remember the many hours of practice, games, and traveling together as a team and the long-term relationships that were built,” Jack said, “as well as winning my first college start against Missouri Southern my freshman year.

“I still stay in touch with a number of team members. Many have stayed in the surrounding area after graduating from SBU, and many have adult children our son went to school with or had the opportunity to meet and become friends with.”

As a student, Jack was prepared academically and supported by the SBU faculty as he began his career with Ozarks Coca Cola 37 years ago. He has earned numerous honors and served on a variety of boards and committees throughout his career.

“SBU’s academics helped me to think out of the box and see the opportunity that was out there to achieve,” Jack said. “It also helped me to be organized and the importance for communication with others.

Another positive influence in Jack’s time at SBU was then-baseball coach Duane Trogdon.

“He stressed education and personal growth,” Jack said. “He always fought for what was right and supported the members of our team in good and bad.”

A special memory for Jack and his wife, Pam ’83, who he met at SBU, was seeing their son, Wes, follow in Jack’s footsteps as a member of the Bearcat Baseball Team from 2008-2012. And, like his father, Wes made a name for himself at SBU.

“He was also recruited by other universities,” Jack said of Wes. “Pam and I wanted him to attend SBU but we needed to let him make his own decision. We went on other visits, but the visit to SBU just seemed to be the right fit and the right place for him to be.”
Jack’s advice for the current SBU student-athlete is to enjoy your college years.

“Work hard and give your all in your education and athletic endeavors,” Jack said. “As you get older, you will see that these are the best years of your life.”