“Commencement is our most important event each academic year,” said Dr. Brad Johnson, interim president of SBU. “At SBU, we are a Christ-centered, caring academic community preparing students to be servant leaders in a global society. While this may seem like an end-point, graduates, commencement is merely the beginning for you. Each of you is uniquely created by God to lead and serve in extraordinary ways.”

The 2021 recipients of the Life Beautiful Award are Caitlin Diepenbrock of Papua New Guinea and Chance Bedell of Odessa, Mo.

The honorees received a pin – a five-pointed star on an open book. In the center of the star is a globe with the Life Beautiful initial in the center. The star represents Jesus, the supreme ideal for life; the book is the Bible; and the globe signifies world vision and service. 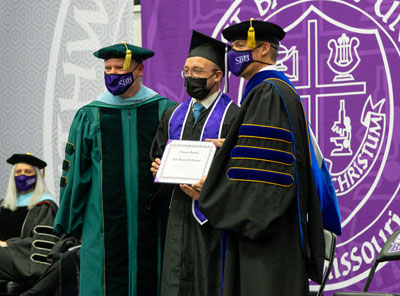 “Caitlin has always had a clear and unwavering Christ-like character,” Dr. Johnson read from a nomination letter. “She has a strong calling to return to the mission field after completion of her DPT (doctor of physical therapy) program. She has talked to me many times about how she will be able to use her training to open doors of ministry. Caitlin has a true love of her fellow students and never misses an opportunity to reach out to those around her who need a hand or just a friend.

“She is a genuine person who overflows with an energy and joy that she will tell everyone is from the abundance of Christ. She has shared so many amazing stories of her childhood on the mission field and the amazing things she has watched the Lord do. She is a great representative of SBU.”

Diepenbrock is a member of First Baptist Church of Bolivar and has served on multiple service projects through the Center for Global Connections at SBU, including to Thailand and the local community through the mission team Polk County Outreach. She is the daughter of David and Shirley Diepenbrock of Papua New Guinea.

Bedell, the son of Liz Bedell of Odessa, Mo., graduated with a bachelor of science degree in interdisciplinary studies. He was voted Mr. Southwest in 2020 by nomination from faculty and vote by his peers.

Bedell volunteered his time and talents in several areas on campus and in the community. He served as an ambassador in the President’s Office, and also served with the Office of Admissions as a campus host, the Office of Institutional Advancement and the Office of Marketing and Communications. Bedell also represented SBU at the Missouri Governor’s Student Leadership Forum. Currently, he serves with the House of Hope Mission in Bolivar, with SBU’s Center for Global Connections, and is scheduled to go on the Appalachian Trail mission trip this summer.

He also has been an active member of the campus small group “Dangerous Men” and other residence hall Bible studies, and often will wake up early to prayer-walk campus with a small group of friends or help at a local community service outreach.

“When you hear Chance’s testimony and how the Lord brought him to SBU and then have seen what he has done with his time here, you would agree with me in saying that he has lived a beautiful life during his undergraduate career,” stated one of his professors in a nomination letter. “Fellow students look to Chance for his leadership and guidance. He leads his peers to pray for SBU, and to pray for us as faculty and staff.

“He led a campaign this year to have days of blessing for specific faculty and staff on campus where students offered notes of encouragement. He also initiated a fundraising campaign to restore the SBU bell tower carillon so that the chimes might once again ring throughout the campus. Chance truly is a model of servant leadership on our campus and in our community.”

The Life Beautiful Award was established in 1937 by Rosalee Mills Appleby, a career missionary to Brazil. This award is given annually to an outstanding man and woman in the Southwest Baptist University spring graduating class. These individuals have demonstrated by their scholarship and character that they are living a “life beautiful.” The faculty selects the recipients, whose identities remain confidential until commencement.

Jason Halverson, assistant professor of exercise science on the Bolivar campus, received the Orien B. Hendrex Distinguished Teacher Award. Halverson has been a full-time faculty member at SBU since 2003. He and his wife, Rachael, have one daughter, Brionna, and one son, Blake.

The award is presented annually to a faculty member who has been regarded by the previous three years’ graduating classes to be outstanding in both teaching ability and personal guidance. In 1969, the SBU Board of Trustees designated this award in memory of Hendrex, a former academic dean.

Dr. Patricia N. Long ’73, who addressed the bachelor degree recipients, retired from Baker University after eight successful years as Baker’s first female president. Since retiring from Baker, she has been committed to working on projects that make a difference in people’s lives, mentoring young professionals, consulting and public speaking. 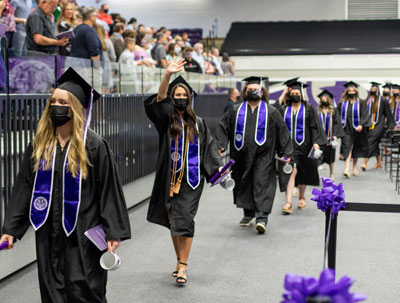 Dr. Tami Glessner, DNP, RN, ’04, the featured speaker at the associate degree ceremony, has been a registered nurse for 17 years – 13 as a pediatric nurse and the last four in academia. She has worked with the associate of nursing students at SBU for the past four years, and loves the time spent teaching and mentoring them, both spiritually and academically.

Since graduating with her bachelor’s degree, Brooke Dudley ’12,’ 19 has worked in the field of software development. After six years as a software tester and business analyst at Jack Henry and Associates, Dudley began working at the Classy Llama, an eCommerce company based in Springfield, Mo.

Dr. Richard L. Asbill ’14 has been in education for 26 years and currently serves as the superintendent of schools for Cassville (Mo.) R-IV School District. Prior to his 21 years of central office experience, Asbill served as an agriculture education/science teacher and FFA advisor.

Photo 4 – The SBU Class of 2021 exits the John Q. Hammons Court at the conclusion of the undergraduate ceremony on Friday, May. 14.