After having its mission project canceled for 2020 and then for 2021 because of the COVID-19 pandemic, Southwest Baptist University’s Center for Global Connections (CGC) team to Colombia headed for the border.

“We were planning on going to Colombia and working with Venezuelan refugees, and ended up going to the U.S./Mexico border and working with other types of refugees and migrant seekers,” Jordan Hillenburg, a senior cybersecurity major from Pleasant Hope, Mo., and co-leader of the team. “It’s crazy how it worked out that we were still working with a similar group.” 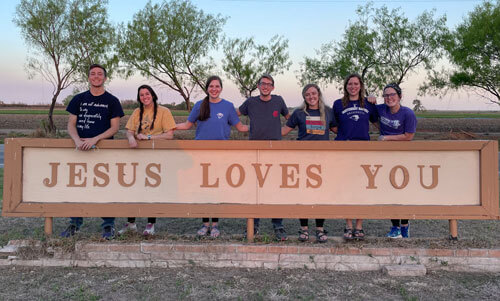 Diana Gallamore, director of the CGC and travel stewardship, said that due to the continued COVID crisis and the inability to travel internationally, the SBU CGC changed plans for this group to serve with another agency partnering and serving immigrants in the United States.

The CGC connected with Border Perspective, which provides educational border trips and service-learning experiences along the south Texas border.

Rachel Van Bebber, a senior criminal justice and political science major from Auburn, Ill., has been a member of the Colombia team her entire time at SBU. She served her freshman and sophomore years and was asked and prepared to lead the team both her junior and senior years before those trips were canceled.

“When we found out the trip was canceled this year, our team was so responsive,” Van Bebber said. “We want to serve together. It doesn't matter if we're not going to Bogota (Colombia). We’re a very mature team. We wanted to serve, so we worked with Diana on it. It took us looking at a few options, but Texas ended up being good for our team.”

The team didn't have much time to prepare, learning in February it would be going to Texas in March.

“Usually, we start around August or September, having weekly meetings and preparing our team for a trip,” Hillenburg said. “We had like a month to get ready for this one, but a lot of the work was similar.”

Ministering to families crossing the border

Along with Border Perspective, the SBU team assisted local churches and organizations in their long-term efforts to minister to families crossing the U.S./Mexico border.

“This particular service-learning trip was immersive, educational and intentionally placed our team into the lives of families in crisis, and at a time when the migrant crisis has become more prevalent in recent weeks,” Gallamore said.

The team primarily served in the Catholic Respite Center in McAllen, Texas, for the week it was on the border. 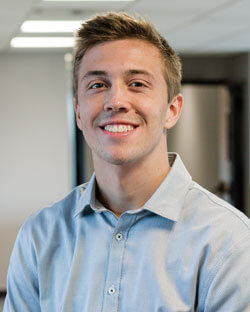 “It was like this shelter in a converted nightclub, but it's where they were bringing in all the migrants and asylum seekers from getting rapid tested,” Hillenburg said. “It's a big open area where you walk in with chairs all over the place; people laying on mats and stuff, filling up every space. At least the first day, it was absolutely packed.”

And, the people the team was helping serve were not just from Mexico, Van Bebber said. They also were coming from Honduras, Nicaragua, or wherever they had experienced oppression.

“These people were all legal and they were dropped off by Border Patrol with their family,” Van Bebber said. “We met a lot of physical needs. We handed out medicine, and lots and lots of baby formula.”

Hillenburg said the team also distributed a lot of clothes to the people coming through.

“There’s a huge warehouse on the second floor, which is where I spent most of my time,” Hillenburg said. “Half of our team was up there making bundles of clothes to hand out for about four days. There’s a kitchen area where they were feeding them.

“These people could only spend up to 48 hours in this area before they had to move on. We would get them their supplies, get them some food and then help them get on their way to meet their sponsor, or whoever was helping them get their status here.”

Van Bebber also helped families get to the bus station, which was across from the respite center, to prepare for the next leg of their journey.

“Once the family was ready to go, they would have all their documents with them and we would take them to the bus station,” Van Bebber said. “Some of them would be getting on a plane and going somewhere else; other people were traveling by bus. Then, they would go to their sponsor. There were people going to the state of Washington, Washington, D.C., Tennessee, Kansas, Dallas – all over the United States – wherever they had people or family.

“But, they would start off at the bus station to go to the airport or wherever, and that would be the last time that we would see them.”

The team gained a deeper understanding of the complexity of immigration on the border and heard the stories of those who serve on the frontlines on a daily basis, which included the founders of Border Perspective.

Border Perspective began in early 2017 when brothers Yonathan and Jordan Moya took a photographic and explorative trip along the U.S./Mexico border to showcase the real stories of the people who live there, the Border Perspective website explains. The Moyas traveled almost 2,000 miles through the southern states of Texas, New Mexico, Arizona and California.

The Moyas’ mother, Eunice Moya, leads a church founded by immigrants for immigrants near the Reynosa/McAllen border crossing and continues to minister to immigrants on the frontlines. 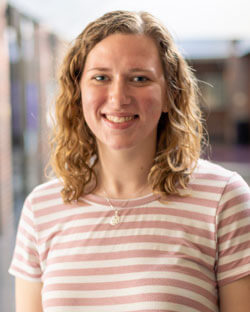 “They don't have a very large congregation, but they meet a lot of needs for the community,” Van Bebber said of the church. “At least twice a week, they have food – boxes full of food, produce and milk that they’re handing out. It's provided by the government and they pick it up. We did a lot of food-drive kind of stuff and handing out food.

“I’ve been keeping up to date with what they've been doing. Sometimes, they're feeding a couple hundred families, those who are coming through, hear by word of mouth or social media. But because of COVID, a lot of them are still very much affected by that and so that takes a hit on their families.”

Hillenburg said when the team first arrived at the camp area and saw that it was packed with people, they thought that was normal. Border Perspective told them that was not normal at all.

“We didn't even know that there was the crisis going on at the border at that time,” Hillenburg said. “There was a lot of need there, but we thought that's what we were getting into. I think our team handled it really well. They were tired for sure, as we were on our feet most of the day, but they do a good job of being willing to serve and still having a positive attitude about it. We had the option to go serve in a different place or in a different area and our team wanted to go back because of the need there, so we went back there the next two or three days.”

Sharing Jesus in word and deed

While the team served the needs of those crossing the border, they were able to share Jesus both through words and actions.

There was a man who was there with his family seeking asylum, who ended up helping serve food and helping other people. Van Bebber, who knows some Spanish, began talking to him and he asked her why the team was there.

“We told him where we're from and that we were here to tell people about Jesus, and he ended up bringing a friend over and he told his friends that, too,” Van Bebber said. “There’s all kinds of people there who volunteer, including older people who come down in the RVs that they call ‘snowbirds.’ We heard about this and different secular groups. One of our teammates, James Friesen, asked, ‘What make us different,’ maybe it’s not through words. The way that our teammates served, and I hope the way that Jordan and I led, people would see Jesus.

“Some of our teammates struggled with the language barrier, but who's to say that God's not bigger than that. We saw God working even though we were only there for a week.”

Van Bebber said the team may not see the fruit during their time there, but hopes those people going through the process at the border were able to see Christ in them, even if language was a barrier.

“I know other people besides myself got to have conversations with people there who did speak English who were seeking asylum,” Van Bebber said. “We prayed throughout the week that Christ is who they would see; that they wouldn't see us for these young kids, but they would see Jesus through our actions.” 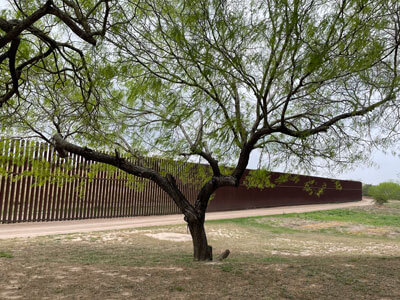 Hillenburg has been to Colombia and Mexico on mission trips and has seen people in need there, but nothing to those extremes in the United States.

“Whenever we’re surrounded with prosperity, I feel like we should have the capability to be helping these people more, which is why we were there,” Hillenburg said of the team’s work at the border. “It was kind of eye-opening to see what people have to go through or how bad their lives must have been for them to have to go through what they're going through just to come to the U.S. I thought that was pretty enlightening.”

Van Bebber said it’s hard to completely understand what is happening, living so far from the border. The team’s first day there, it saw cameras everywhere from reporters to others coming in and recording.

“That first day when I was walking to the bus station, I asked the woman that was going with me, ‘Is this normal,’ and she said, ‘They're here all the time and it’s not reported correctly.’ To actually go and see for ourselves, I experienced that tension. But, I kept being reminded that we see people that are hurting right now.

“We saw it on the border, but it’s also in our communities here in the middle of the United States. Maybe we’re just not looking, or we see it and don't want to see it. The Bible tells us to take care of the least of these; actually taking that to heart and taking responsibility because we can’t rely on the government to fix everything. I think as Christians we must take more responsibility and not expect everybody else to do it.”

This mission experience provided the SBU team opportunities to serve on practical levels, share hope with those who are in crisis, be challenged to find opportunities to exercise compassion, and to consider how to take action upon returning home, Gallamore said.

And, Van Bebber and Hillenburg said that firsthand experience helps them share with others back home or wherever they go.

“We were there for less than a week, but a big part of our role was an educational trip,” Van Bebber said. “Going down even one day when we weren't necessarily working, we were able to see the border and see the wall, and see what life was like for people there. Part of what I’ve shared is, ‘This is what I have seen; the kind of conditions I'm seeing, the people coming in. There’s fear, but also there’s a lot of joy because they’re in the United States.”

“It’s hard to talk about anything going on at the border without things getting political, but one thing Border Perspective was stressing was regardless of who you vote for or whatever party you’re part of, the reality is there’s people here who are poor, hungry and in need,” Hillenburg said. “As Christians, the Bible says, ‘Whatever you do for the least of these, you do for me,’ so we are called to serve those people and provide for them.”

PHOTO 2: One segment of the wall between the U.S. and Mexico.