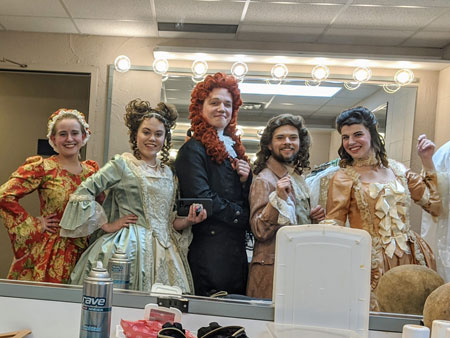 The festival honored SBU theatre with several meritorious achievement awards, including nine meritorious achievement awards for the production of “For Such a Time as This,” an original play by SBU student Bethany Vermillion. The production received commendation for Sophia Marsh for directing; Brittany Davis for choreography; Maura O’Brien for properties; Jessica Paxton for dramaturgy; Ashton Hensley for performance; Joel Walley and Daniel Stucky for original composition and sound design; and Vermillion for playwriting. The cast, crew and production team also earned recognition for excellence in collaboration of original work and theatre advocacy. SBU theatre also received commendations for Alexa Bell for her set design for “Tartuffe” and Abigail Andrews for scenic painting for “Steel Magnolias.”

As part of the festival, SBU junior Christina Foltz directed a concert reading of a 10-minute play selected for the National Playwriting Program. Foltz was paired with a mentor from the theatre industry who worked with her throughout the process.

“I learned about conducting professional auditions and about developing new plays and made great connections in the professional theatre world,” Foltz said. “I appreciate what this experience adds to what I have done at SBU.”

Eight SBU students, including Ali Oldweiler, Tayler Bates, Alexa Bell, Daniel Stucky, Lauren Wineinger, Abigail Wilken, Caleb Mooney, and Elizabeth Coulter, competed along with their partners in the Irene Ryan Acting Competition. The competition is an event where nominated students audition for a scholarship established by the late Irene Ryan, famous for playing Granny on “The Beverly Hillbillies.” This year’s festival had 315 nominees from more than 80 colleges and universities in the region competing for the scholarship. Alexa Bell and Max Stoner, as well as Tayler Bates and Haley Gill, were two of 68 teams to advance to the semifinal round. 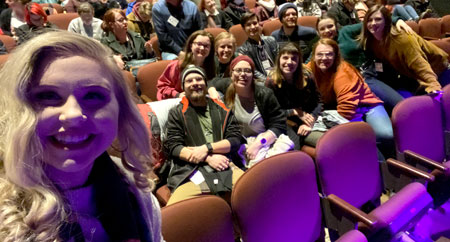 “It was an honor to have my design in KCACTF’s costume parade,” Foltz said. “Hearing the reactions of an audience full of other designers and creators as they saw each piece for the first time helped validate all the hard work that was put into ‘Tartuffe.’”

SBU participates in the festival every year by entering their productions for review by a respondent from another institution in the region and by attending the annual festival. Next year the festival will be in Des Moines, Iowa.