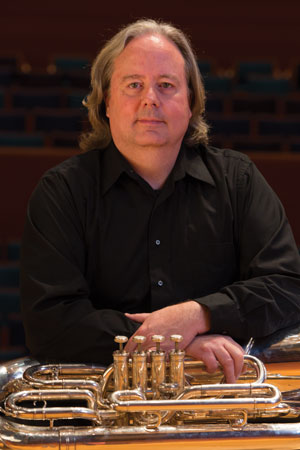 Stein is active throughout the United States as a recitalist, clinician and chamber musician. He has appeared several times at the International Tuba-Euphonium Conference (ITEC) and the U.S. Army Band Tuba Euphonium Conferences, at all of the regional conferences since 1996. He also has appeared in six European countries and at numerous universities throughout the United States.

Under Stein’s direction, the UMKC Tuba-Euphonium Ensemble has appeared in several ITECs, the U.S. Army Band Tuba Euphonium Conference, and all the regional conferences. With Scott Watson and Dr. Lee Harrelson, Stein co-directs Thunder! and the Thunder All-Star Tuba Euphonium Ensembles (TASTEE). A unique joint ensemble, comprised of students from UMKC, the University of Kansas and Missouri Western State University, TASTEE is gaining national attention for its mission and high level of performance.

An avid supporter of chamber music, Stein currently performs with Missouri Brass Quintet (in residence at UMKC), has performed with numerous brass quintets and tuba quartets throughout the United States, serves as the coordinator for UMKC’s brass chamber music program, and coaches the UMKC Conservatory Graduate Fellowship Brass Quintet. He is a founding member of the Fountain City Brass Band, an internationally acclaimed, award-winning British-style brass band.

Stein is the recipient of UMKC’s 2005-2006 Muriel McBrien Kauffman Excellence in Teaching Award and has been nominated for the award almost every year since.

The public is invited to attend this free recital and is encouraged to attend a reception in the Meyer Recital Hall lobby after the performance, as well as support SBU Music students through donations for music scholarships.

Jonathan Sokasits is scheduled to appear on March 26 as part of the SBU Community Concert Series.

For more information about the concert series, contact Dr. Robert Carney, associate professor of music at SBU, at (417) 328-1644 or rcarney@SBUniv.edu.