Eight candidates were nominated by SBU faculty and staff and voted upon by the student body for the purpose of selecting a pair of students to represent the Bearcat family for the next year.

The pageant featured introductory videos and a talent presentation by each candidate, followed by a round of online voting to determine the top four candidates, who then participated in question-and-answer sessions. A final round of voting determined the winners.

During the talent competition, Bedell presented a spoken-word piece sharing his testimony – his story.

“I put a lot of time and prayer into thinking about what I wanted to do,” Bedell said. “I wanted to use this platform and opportunity to be vulnerable and share my story.

“I felt called to share my story for a little while now, and I didn't know when the opportunity would arise; maybe Locamente or a chapel session. So, when I found out I was nominated for Mr. Southwest, those opportunities briefly passed my mind. But, I felt that God was leading me to share my story, and hopefully, inspire and help someone else out there who may be going through the same thing.”

Bedell, who plans to pursue his MBA at SBU after graduation, was honored to be named Mr. Southwest.

Phipps’ inspiration for her talent portion came from her mom, Jenny.

“Funny story – it’s my mom’s old high school talent show act,” Phipps said of her performance. “She definitely was in the crowd, going along with all of the dances. I think she still remembers it.” 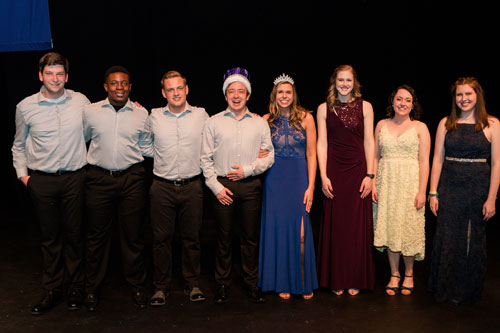 Phipps was joined in performing the routine to “Proud Mary” by several of her friends from the Woody-Gott residence halls.

“I had basically every girl on my hall, and then a few key people who have been really inspirational in forming who I am at SBU,” Phipps said.

Phipps, who wants to become a NICU physical therapist, was not only happy to be named Miss Southwest but encouraged by the nomination.

“It’s really nice hearing from my teachers and faculty that they thought I could do this because I definitely did not ever think about it,” Phipps said. “It’ll be so easy to talk about SBU because it truly is the best university and I came here for a reason. I absolutely have loved it. I’ve grown spiritually, I’ve grown academically and my friend group is amazing.”

This year, Mr. and Miss Southwest 2019 – Parker Hall and Kailee Knudsen – invited the 2018 Mr. and Miss Southwest, as well as the 2020 candidates to participate in a community service project they hope will continue. The 2020 project was at Service Oriented Aviation Readiness (S.O.A.R.) in Bolivar, a nonprofit corporation whose primary purpose is mission aviation.

The beginnings of the “Miss Southwest” pageant date back to the 1930s, with “Mr. Southwest” being added in 1963. The pageant, which was organized by the students of SBU’s University Activities Council, was one of the keynote happenings of Bearcat Days, a visit event in which admitted students considering SBU attendance were hosted on campus.

For more information, contact Director of Student Leadership and Engagement, Dr. Nathan Penland at (417) 328-1828 or npenland@SBUniv.edu.