BOLIVAR, Mo. — Cooper Locke and Hailey Campbell were announced as the 2020 Southwest Baptist University Homecoming King and Queen during Homecoming Chapel on Oct. 2. 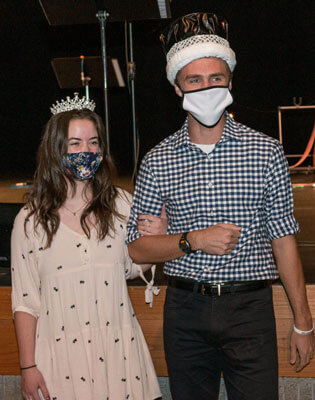 Locke is a computer science and mathematics major from Stockton. He is the son of Charla and Jason Locke. After graduation, he plans to pursue a master of education degree at SBU.

Locke was honored to be selected, and thankful that Homecoming was able to take place this year during the COVID-19 pandemic, which has canceled so many events across the country.

“It's an amazing feeling to be chosen as Homecoming King,” Locke said. “There were a lot of really amazing people on the Court, so to be selected out of all of them is really quite an honor.

“It would have been really fun to participate in the parade as a candidate and also to be recognized with my peers on the football field. Overall, though, I'm still super grateful that SBU decided to have Homecoming this semester.”

Campbell is a social science education major from Pawnee, Ill. She is the daughter of Candi and Charles Campbell. After graduation, she plans to become a history teacher.

Campbell said she is excited to have the chance to represent SBU, even if the coronation and activities of Homecoming Week looked much different than in years past.

“I have felt incredibly loved and I am so grateful to have such wonderful friends here at SBU – they are the reason for today,” Campbell said. “It was a bit of a weird Homecoming Week without all of the normal events, but I’m grateful for what SBU did so that students could still have a good Homecoming experience.

“This whole experience just made me really grateful for ‘my people’ here at SBU. I’m so beyond blessed the Lord led me to SBU and gave me the opportunity to meet and be loved by such wonderful friends.”

The rest of the 2020 Homecoming Court included:

In addition, princes and princesses for the freshman, sophomore and junior classes were chosen by their peers.

For more information about SBU Homecoming, please contact the Office of Alumni Engagement at (417) 328-1806.

CUTLINE: Cooper Locke (right) and Hailey Campbell were selected as the 2020 SBU Homecoming King and Queen during Homecoming Chapel on Friday, Oct. 2.