BOLIVAR, Mo. – As an extension of Southwest Baptist University’s Fall Chapel series – “Engaging Our Broken World” – the University Activities Council hosted a forum on “Diving Into Diversity” on Tuesday, Oct. 20 in Pike Auditorium on the Bolivar campus.

The panel featured moderator Dr. Matt Kimbrough, division head of The Courts Redford Division of Christian Ministry at SBU, and Missouri Baptist Convention pastors Mike Hubbard of Genesis Church in Eureka, and Jon Nelson of Soma Community Church in Jefferson City, as well as newly elected president of the MBC. Both Hubbard and Nelson are part of the MBC’s new racial reconciliation task force. 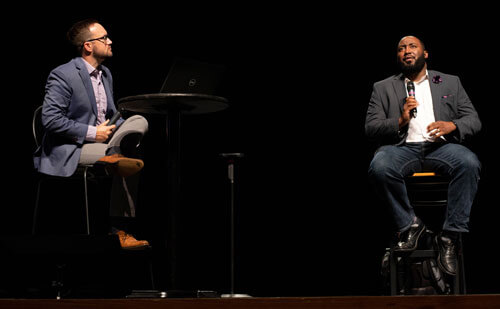 Nelson, who on Tuesday, Oct. 27, was the first African-American in 187 years to be elected president of the MBC, talked about how he and his family look at different issues, especially when it comes to race and reconciliation, a little differently, as a bi-racial couple.

When the time came to plant his first church, a question from his oldest daughter made him think about what that church might look like.

“She asked, ‘Daddy, why can’t we have a church that looks like our house,’” Nelson recalled. “I think it was a really good point. We had been going through the Bible talking about what it looks like to have a church that is diverse in so many ways. When you look at Revelation, it says, ‘every tribe, tongue and nation;’ it doesn't mean any gray, amalgamous people. It means all of us are going to be in our element, in Heaven before the King, worshipping Him in our own tongues. I can’t wait for that. But then, I look at most churches, and they don’t look like that.”

Nelson shared his own experiences with racism as an African-American, and said it is important, as a convention and as a people, to “lean into the uncomfortableness of this moment,” to have those uncomfortable conversations about race and the current climate of the nation. And, the key to that, he said, is the Gospel.

“For your generation to overcome these issues that you’re seeing on TV, that you’re seeing on the internet right now, you must become comfortable with being uncomfortable,” Nelson said to the students in attendance. “For the Gospel to expand on this earth, you have to become comfortable with being uncomfortable. That’s the way the Gospel’s always expanded. That’s the way we’ve always moved forward. There’s never been a question about that; it’s whether or not you're willing to do it.”

Nelson has seen his church grow – 53 percent black, 47 percent white – and said the goal is to be “a people defined by the way that we change our world around us.”

“We say the tie that binds us, Jesus Christ, is stronger than anything that divides us,” Nelson said. “We have to be bound by Christ, first and foremost. I really believe that the only King, not mayor, not governor, not president, is King Jesus. And until we get to that point, we’ve got a long way in squashing the history of racism in this country. But you guys are the ones who can do it.

“The thing that excites me about Gen Z is you have the opportunity to do what my generation failed to do, what the generation before failed to do, what millennials have failed to do but are still trying to do right now – not to end racism, but to bring the Gospel to bear when it comes to racism. Because that is the only viable solution that will change the narrative on this earth.”

During the question and answer session, Hubbard said the key to engaging is to learn about those who are different from you.

“Build relationships, get to know people,” Hubbard said. “What made the early church so beautiful and repulsive to the culture at the same time was this issue. When Paul planted a church in the city, he started in the synagogue and he preached the Gospel to the Jews. Then, he went to the secular culture and he preached the Gospel there. What they did is figured out how to love one another when they wouldn't have had anything to do with each other in the world before that.

“Intentionally start looking at people in the eye and say, ‘Hey, I really want to get to know you.’ Break the bubble and go get to know people. Do that because this is what the Gospel compels us to do. Go back to what it looks like to be in the book of Acts, where there’s intense relations with people who are diverse – people who disagree with me on uncertain issues and who look different from me and intentionally engage that, because this is what the Kingdom requires of us.”

The Chapel series has included discussions on “Engaging Brokenness,” “Engaging Racism,” “Engaging Anxiety,” with the final discussion on “Engaging Political Division.” For more information on this series, contact Kimbrough at mkimbrough@SBUniv.edu.