When he was in high school, Evan Kirksey was shy — “kind of nerdy and kind of introverted,” he says.

To help him overcome his shyness, Evan’s father, Daren ’87, ’89, urged him to join speech and debate at Willard High School. 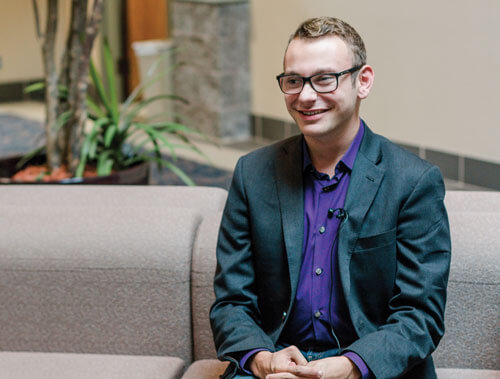 “It completely pushed me out of my comfort zone,” Evan said. “And I remember thinking, ‘I hate this. I’m never going to do it again.’ But the more I did it, the more I realized that I could be competitive and I could be good at something, too.”

“Speech and debate kind of taught me to believe in myself in a whole new way,” Evan said. “So, whenever I came to SBU and I found out that we had a debate program and my major was an option, I decided that was the route I wanted to go.”

The Speech Communication and Theatre Education major has won many prestigious awards in both speech and debate at state, regional and national tournaments throughout his career. And when the COVID-19 pandemic forced the premature end to the Speaking Bearcats’ competitive season last March, Evan decided to continue competing and advocating for a cause he believes in — students with special needs.

Speech for competition serves to advocate

Evan wrapped up his junior season with two state championships — one in persuasive speaking and one in communication analysis. But it was his persuasive speech that garnered success for Evan, as well as an invitation to be the keynote speaker at the National Summit on School Safety, which was hosted by “Safe and Sound Schools” in October 2020.

“The speech was Evan’s standard persuasive speech for the season,” said Dr. David Bailey ’00, director of forensics at SBU.

“When the season ended so abruptly and Evan was offered the chance to record his speech and enter it into Pi Kappa Delta’s virtual ‘Persuasion Works’ national competition, he jumped at the chance.”

Evan wrote and delivered a 10-minute persuasive speech discussing the lack of effective emergency safety measures for members of differently abled communities. He used his speech to advocate for substantive policy changes to correct this injustice. 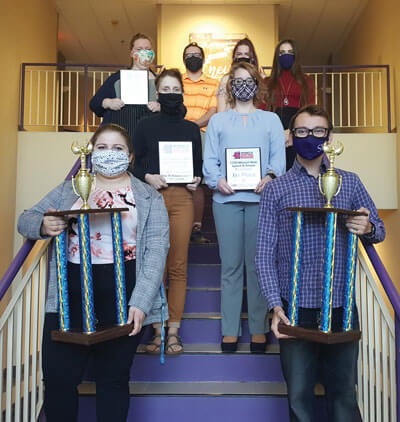 His performance earned him a tie for second place at nationals, and ultimately, the opportunity to get involved with “Safe and Sound Schools.”

“During the beginning stages of my junior year, I found a topic for my persuasive speech where students with disabilities are not really able to run, hide or fight in active-shooter situations,” Evan said. “I just thought that there were a lot of red flags with that because not every special needs student can run, can hide and can fight. So, as I started researching, I found something called IELPs, which are individualized emergency and lockdown plans. The more I thought about that, the more I considered it and the more I realized, ‘Wow, this can be really beneficial.’

“I think a lot of schools probably haven’t really thought about their special needs students when it comes to their emergency plans, and that’s not really their fault. It’s just something that kind of gets overlooked. The goal of promoting these IELPs was to stop having that happen and to show the special needs students and the differently abled communities that they are worth protecting.”

Partners with “Safe and Sound Schools”

Evan reached out to the founder of IELPs, Michele Gay. Gay created IELPs after she lost her daughter, Joey, in the 2012 shooting at Sandy Hook Elementary School in Newtown, Conn. Joey was one of those students who was unable to run, hide or fight because of her disability. Soon after the creation of the IELPs, Gay and Alissa Parker, who lost her daughter, Emilie, in the shooting, founded “Safe and Sound Schools,” whose mission is to provide safe, secure schools for students and educators and to help other communities do the same.

The two talked and compared notes on the research Evan had gathered and the intel from Gay. Soon after their conversation, Gay said she and her organization wanted to partner with Evan.

“Most of the members are adults in their 30s or 40s, so they were excited to have someone who’s young, excited for the cause, going into education and wanting to make a difference,” Evan said.

Evan had titled his speech “Plan, Prepare, Protect,” which also is the name of the campaign he launched along with “Safe and Sound Schools.” He was invited to be the keynote speaker at the national summit to not only share the message of his persuasive speech, but because of his personal connection.

Having been diagnosed with mild cerebral palsy when he was young, Evan had some mobility issues. He was taken out of class every day to go through physical therapy, an experience that allows him to identify with these students and to recognize their needs.

“I wasn't the same as everybody else, and that was really hard,” Evan said. “I just wanted to be normal and I wanted to be liked and have friends, and there wasn't very much of that whenever I was young. Because of that, I knew how it felt to not be included. And whenever it comes to something as big as emergency situations and lockdown procedures, that’s something that every person deserves to be included in.

“Since Columbine, there’s a long-standing history of special needs students who have lost their lives in school shootings. I didn't think about it until I found this topic, but that’s exactly why it’s so important because people have to start thinking about it. Having lived it, I know that at one point in my life, I wouldn't have been able to run. I had to work really hard to get to where I am today, and I think it’s really important that no matter someone’s ability, someone is planning for them.”

Gay said Evan has been a tremendous addition to their team, both as a speaker and contributor.

“His work as an advocate, presenter and the creator of the ‘Plan, Prepare, Protect’ campaign resonated with us at ‘Safe and Sound Schools’ instantly,” Gay said. “Shortly after connecting, we invited Evan to join our National Summit on School Safety as a presenter to share his perspective as a leader and student with access and functional needs. Evan’s voice and lived experiences lend context and practical insight to our work to support the safety needs of students, staff and community members with special needs.”

Evan says that advocacy starts on the individual and local level, which is why he created a petition advocating for IELPs to be implemented nationally.

“My hope, especially as we figure out our footing a little bit more here in the world, is to be able to go around to local school boards and to be able to send the sample letters that I have written to the different school boards across the state of Missouri. As Missouri is hopefully receptive to that, we can branch out even further.”

At the National Summit on School Safety, which was held virtually, Evan was able to make even more connections. He said the goal, especially for the summit, was to present ideas on the national level.

“I was able to engage in several round-table discussions pertaining to disability inclusion and safety within schools,” Evan said. “I spoke with administrators, teachers, parents of special needs students, principals from past school shootings and more.”

Evan always wanted to go into education, following in the footsteps of his father, Daren, and his grandfather, Jerry, but said he never thought about the school safety aspect. Through his research, his message and his advocacy, Evan has been invited to join the “Safe and Sound Schools” team, where he will lead a group dedicated to disability planning and inclusion.

“The goal is to collaborate and create a template for Individualized Emergency and Lockdown Plans that can be attached to IEPs,” Evan said. “This is something that I plan to be a part of for a long time. I would love to make true, lasting change for the protection of American special needs students.”