The Center for Teaching and Learning (CTL) at Southwest Baptist University has a full slate when it comes to designing and developing online courses for SBU faculty, while also managing dual credit courses.

But, when the decision was made for SBU to transition from in-person to online-only learning, the workload for the CTL was ramped up in a hurry.

Leading the transition for the team was Angela Carr ’99, senior director of the Center for Teaching and Learning. 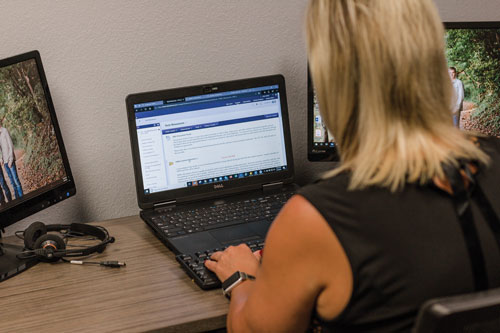 “We all started having conversations,” Carr said as the transition to remote learning was beginning nationwide. “I’m a part of a lot of groups associated with other universities, and that was the topic for about two weeks coming in.

“So, while things were happening on the East Coast, it seemed crazy to think it would happen here. But, we started talking; more so about ‘What’s our capacity? What could we do? How many courses could we design quickly?’ That’s where my brain went first – how many courses could we design super-fast to get through the rest of the semester. And, I think our answer emerged before we even had a chance to think, ‘We can’t design. We just can’t do it. There’s not enough time.’”

“We were thinking through what might be essential structures that might need to be in every course and that type of thing,” Marsch said of the early discussions. “It came together surprisingly well and easy.”

Carr said once she was notified that SBU would transition to remote learning, she spent the next 24 hours putting together a resource on Blackboard, SBU’s learning management system (LMS).

“This was before our team even had a meeting or anything,” Carr said. “I just stayed up all night and put together a resource. Then, we all had a Zoom meeting on the Sunday before Spring Break was supposed to start.”

At that point, said Peggy Walden ’07, instructional designer for the Springfield campus, the CTL thought it was still going to have the opportunity to conduct face-to-face training sessions with faculty.

“We thought we were going to do the whole 10-people limit face-to-face trainings, back-to-back all day long,” Walden said. “Then, Angie said, ‘I’ve already put this course shell together and we’re just going to do this online.’

“We were thinking we were going to be running simultaneous trainings, somebody’s going to have to be fielding the phones and the emails, and we knew that there was a rush that was going to come,” Carr said. “We knew what topics we needed to cover. Our main focus was Blackboard, which is the LMS, Panopto, so instructors could make video recordings, and then Zoom, so they could host online classes to synchronous video.”

Carr said the CTL basically took what it planned to do seated and quickly migrated it to an online environment.

“I feel like we kind of did that preemptively,” Carr said. “We might have done that maybe a day or two before we realized it wasn't even going to be an option to go seated. I remember just asking Dr. Lee Skinkle – SBU provost - ‘Is there any way we could do this in terms of offering webinars.’ Then, we had a meeting and laid out all our topics. We did 13 different training sessions, and we literally had no starter content provided at all.”

The team would meet every morning for about an hour to prep itself for the day ahead.

The CTL would repeat the same routine each day: meet at 9 a.m., discuss what happened the previous day, and conduct hour-and-a-half-long training sessions with faculty.

“We recorded every single one of them and then uploaded them into that resource that was built inside of Blackboard,” Carr said. “At the same time, we were continuing to build resources. We really felt like we had five days to get all 270 faculty members ready to present their first online course.”

Walden said it was like a week’s worth of Groundhog Days.

“It was some of the longest days I think I’ve ever worked,” Carr said. “I can’t remember ever rolling out of bed and working, and then just working into the night. But, we talked about it. We were oddly invigorated that week.”

Austin Bunn ’05, lead instructional designer and assistant director of online learning, added, “Working from home was very productive. We didn't say, ‘We can’t do this. We’re not in our element.’ We were still in our element, and we capitalized on it.”

On the suggestion of a faculty member, the CTL team began hosting weekly meetings that allowed faculty to learn and share ideas about remote learning.

“We started doing them every single week, and people just kept coming,” Carr said. “We would meet as a team every week, and there was really no agenda; it was a lot of updates. It was refreshing to see different departments come together, graduate and undergraduate, and different campuses be represented. Everybody just shared ideas and asked questions.

“Our faculty really stepped it up. Our theme was ‘just do your best.’ That was what we encouraged people to do was just ‘do the best that you can do.’ As long as you do your best, your students are going to be OK – and they did.”

Carr said the purpose of the CTL is to promote online learning – “it’s what we do.”

“The things that we taught people to do are things we’ve wanted to teach everyone to do for a long time,” Carr said. “It’s just now it was a necessity, and so we were really happy to be able to have the opportunity to do that.”

And, the team has learned to expect the unexpected, and to be prepared for anything.

“I would hope that what we’ve learned from this is not just a solution for a pandemic, but for any disaster, whether it be a tornado or the next ice storm, or whatever,” Walden said. “I would hope that we’ve learned as a university that we can be flexible and agile for disasters. And hopefully, the faculty will tuck that in the back of their head, and be like, ‘OK. I can do this, if I have to.’”

“This fall, we can prepare,” Carr said. “I’m telling everybody to plan their classes like they’re going to have to be online, and then if they’re not, you’re still ready.  “We are not facing the fall semester with fear. We’re actually just ready to serve in any way that we’re needed.”

In order to ensure approximately 300 faculty and staff would be able to work from home and students were able to complete coursework, SBU’s Information and Technology Services had to identify potential problem areas and find solutions.

“We had faculty, staff and students that did not have the technology to work from home or take classes online,” said David Bolton ’79, chief technology officer at SBU. “From a technology perspective, the University’s computer systems were in good shape. Having moved most mission-critical systems to the cloud proved to be extremely beneficial.”

Bolton said the transition to working and learning from home went as smoothly as possible. He also said that everyone was patient as ITS worked through technical issues such as providing tools and hardware to those who needed it, providing telephone communication and managing security issues.

“I was honestly so blessed by the cooperative spirit of our faculty, staff, and especially students,” Bolton said. “Faculty and staff were appreciative, patient and understanding, and our students were grateful for the assistance we were able to provide many of them. I was pleasantly surprised and very appreciative of our technology partners. We had companies providing free software to students so they could continue their studies. Many companies expanded their services and waived usage fees to provide us with what we needed. The higher education technology market stepped it up during this time in providing products, services, and assurance that they were in our corner and willing to assist in whatever way needed.

“I think overall the University adjusted well. Of course, there were some bumps in the road. When you have to transition in a matter of days to a whole new way of teaching and conducting business, there will be issues. ITS received many emails and words of encouragement and thanks from faculty and staff for being available to them when needed.”