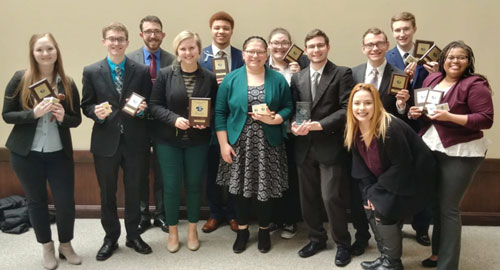 BOLIVAR, Mo. – The Southwest Baptist University Speaking Bearcats kicked off the second half of the 2018-2019 season at the 21st Scott Jensen Gorlok Gala Tournament on Jan. 25-27, hosted by Webster University in St. Louis.

Despite the long Christmas break and being down four team members, the Speaking Bearcats placed third in overall sweepstakes out of the 42 schools present.

“The ‘Gorlok’ (named for the Webster University mascot) is, historically, a very tough tournament,” said Dr. David Bailey, director of forensics at SBU. “In terms of size and competitiveness, the Gorlok is the closest thing to nationals that we see in a regular-season invitation tournament.

“I think it served as a good early spring barometer of our competitiveness. I think our students saw the results as showing promise, but also a bit of a wake-up call.”

The Speaking Bearcats are preparing for the Missouri Association of Forensics Activities (MAFA) State Championship tournament Feb. 22-23, which also will be hosted by Webster University.