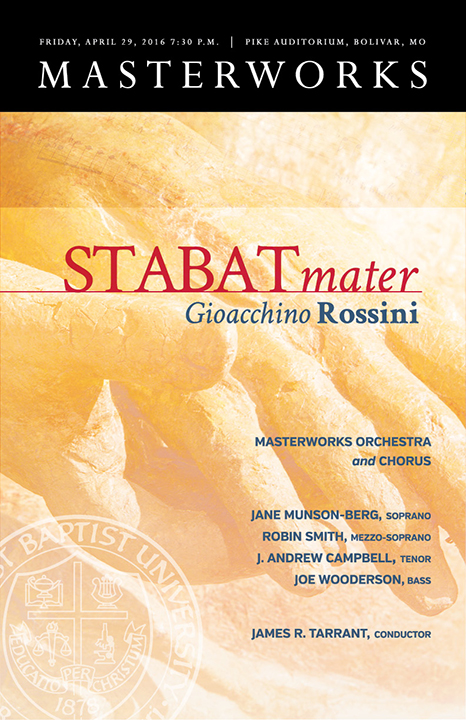 The Department of Music of Southwest Baptist University will present its annual Masterworks Concert at 7:30 p.m. Friday, April 29 in Pike Auditorium. The department’s massed choirs and orchestra will present “Stabat mater” by Gioacchino Rossini.

For almost half of a century, the Masterworks presentation annually provides southwest Missouri audiences the opportunity to experience musical works that are best presented by the combined efforts of department, university and community. The repertoire has included the great classics, the unfamiliar pearls and modern compositions of significance.

Dr. Campbell currently serves as associate professor of music at SBU and directs the SBU Concert Choir and Bolivar Community Choir. He serves as orchestra conductor for SBU’s musical and opera productions and is an active tenor soloist, having performed numerous works with orchestra.

Robin Smith, mezzo-soprano, is a native of Louisville, Ky., and has performed as soloist with the Evansville Philharmonic and with the University of Louisville Symphony Orchestra. Her operatic performances include principal roles in “The Beggar’s Opera,” “Riders to the Sea,” “The Magic Flute,” “Trouble in Tahiti” and “The Medium” with supporting roles in “Rigoletto” and “Les contes d’Hoffmann” with the Indiana University Jacobs School of Music Opera Theater. Active as a performer and teacher, Smith has taught at Lamar University, the University of Louisville, DePauw University and the Indiana University Jacobs School of Music. She has compiled the duets of Cécile Chaminade, “Nine Duets of Cécile Chaminade,” with translations and a foreword published by Recital Publications in 2014. In 2015, she joined the faculty at SBU as assistant professor of music where she teaches applied voice and lyric diction, as well as courses in music education.

Joseph Wooderson, a native of Bolivar, Mo., currently directs the vocal music program at the Weaubleau R-III School District. He has served as a professional church musician in Missouri and Texas churches for more than 20 years, and has taught as an adjunct professor of music at SBU and as a graduate assistant at Southwestern Baptist Theological Seminary (SBTS). He received a master of music with distinction from SBTS in 2003 with concentrations in choral conducting and vocal pedagogy and a bachelor of music in church music, a bachelor of science in music industry, and a performer’s certificate in voice at SBU. He was a baritone soloist with the Oratorio Chorus and Fort Worth Symphony Orchestra. In 2001, Mr. Wooderson was a finalist in the graduate division of the Texoma Regional National Association of Teachers of Singing Artist Awards Auditions.