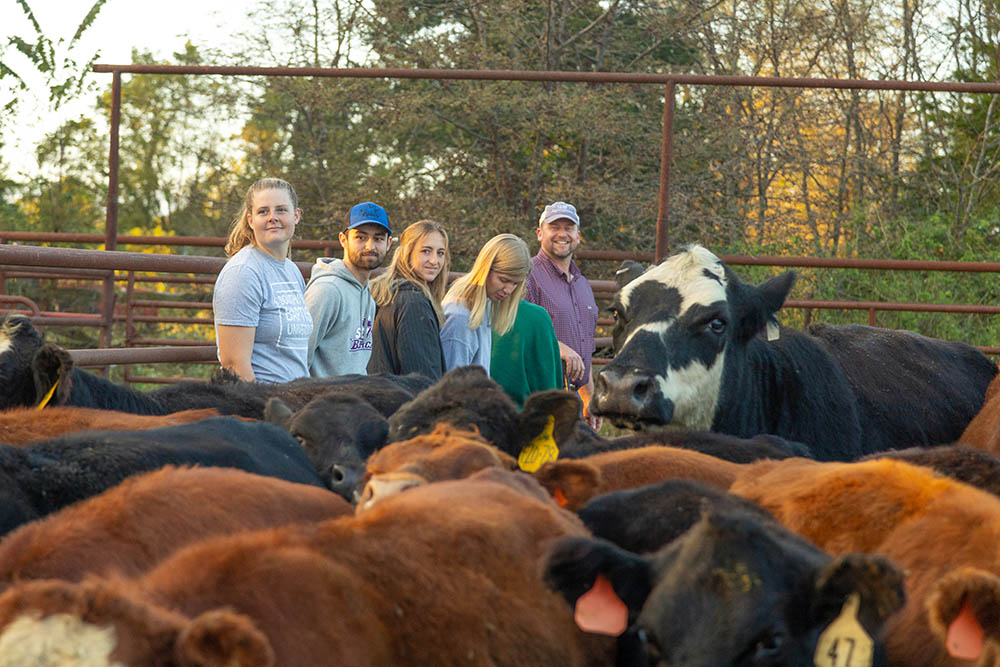 Sigma Zeta is a national science and mathematics honor society. The society funded 20 research projects for 2021-22 nationwide through a competitive process, with six of the projects awarded to SBU students.

Each of the groups also wrote a research proposal, beginning as early as last spring, and each was successfully funded. They presented their research at the Sigma Zeta Convention, hosted by Concordia University, during spring break in March and will present their research during Missouri Beef Days on May 16-21.

“The students are investing a substantial amount of time,” said Dr. John Murphy, associate professor of biology. “On any given week, when we’re actually collecting data, they may spend 12 or 14 hours with me in a given week.”

Murphy locally owns and operates an 800-acre farm with 200 head of cattle, where students are able to conduct their research.

This year’s research projects are:

Murphy said the project that Yoder and Schulte presented this year was a product of two-and-a-half years’ worth of data.

“It’s like a master’s thesis for them,” Murphy said. “Most of the projects revolving around all of them have agriculture in them. A lot of it is looking at weaning methods for calves and then development of immune system function. While most of the students are biomedical science students, we utilize cattle as our model organism as their immune system function is similar to humans.”

Schwemmer and McDonald devised a survey that was administered to different cattle producers in the region, talking about the type of wormers they were using.

“We then collected samples, which Sarah and Kate brought back to the lab to conduct a parasite analysis of the manure,” Murphy said. “What we looked for was to see if what producers were reporting they were doing was getting the outcomes that they were expecting from their anti-parasitic treatments. It ended up being pretty interesting. Sounds slightly disgusting, but they actually really enjoyed it by the end.”

Murphy also said part of the Sigma Zeta funding allows for students to have their abstracts published.

“All of my students are published authors now,” Murphy said. “And, they have the opportunity to present at a national conference, which are things they can put on their résumés as they’re applying to medical school or dental school, etc., and that’s really, really helpful.”