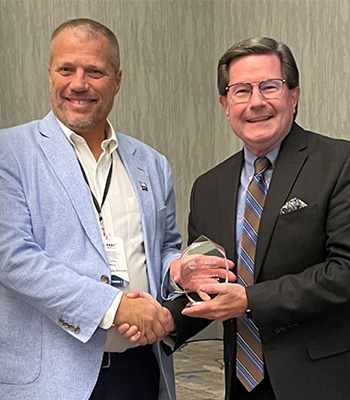 “I am most certainly humbled and honored to receive this award.” Schriver said, “There are a number of FARs who do outstanding work, and truthfully a number of them could have been honored. So, to have been selected, I am overwhelmed, simply because all FARs are doing what they can do on their campuses to enhance the student-athlete experience.”

“My work here at SBU is probably more behind-the-scenes than other FARs at other campuses, but I have had the great opportunity to serve in the NCAA Division II governance structure, and I am proud of what our committees have done to better the academic life and the mental health of student-athletes across this nation.”

There are currently 309 Division II universities and colleges. Schriver was nominated by an individual who served with him on the DII Management Council from 2014-2018. This award is based on Schriver's nominations and contributions. Including his work at levels of the MIAA and GLVC conferences. Along with his work at the national level on the Academic Requirements Committee, the Membership Committee, the Management Council, and now appointed to the Legislation Committee. For the last year, Schriver has also served as the DII Parliamentarian for the voting on the new NCAA Constitution. He served on the Implementation Committee for Division II after the constitution vote.

“We are so proud and excited for Dr. Schriver.” Director of Athletics Clark Sheehy said, “he is such an important part of our team, and we are thankful for all the work he does for SBU and specifically for Bearcat Athletics.”