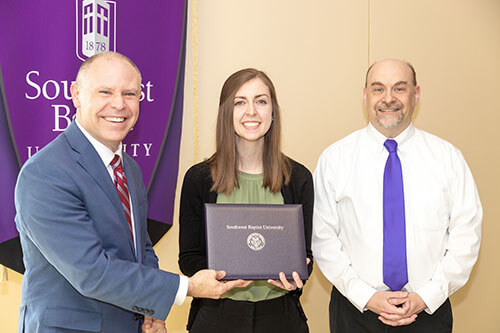 The Stanley H. Dill Distinguished Scholar Award and the Chaney Scholar Awards are unique in that they do not go through the traditional scholarship process. The scholarship awards are determined through faculty nominations provided to the Deans Council, which narrows the nominations to a group of finalists. These finalists are then presented to the president for final selection.

“The Chaney and Dill families loved Southwest Baptist University deeply,” said Dr. Brad Johnson, vice president for institutional advancement at SBU. “The generosity and leadership that were the hallmark of their lives continue to influence students through the scholarships that bear their names. What a delight it is to see the exemplary Christian legacy of the Dill and Chaney families pass to deserving students like Andrew Eisenhour, Savannah Garrison and Hannah Laws. I am confident the Chaneys and the Dills would be delighted to see these students carry their legacy forward with distinction.”

Hannah Laws, a senior computer science and mathematics major with a minor in music from Hannibal, Mo., is the recipient of the Stanley H. Dill Distinguished Scholar Award. The award is presented to the student who has demonstrated exemplary academic performance, campus leadership, Christian character and involvement in church ministry.

Laws is a member of the Gordon and Judy Dutile Honors Program, currently carries a 4.0 cumulative grade point average and has been named to the President’s List every semester of her college career. Her involvement includes a variety of areas across campus including academics, music and ministry. Laws has been a spokesperson for the Computing and Mathematics Division during both Scholars Day and Fall Preview Day, a mentor in the computing area and a tutor for the mathematics area. She is a leader on her computing area Senior Project team, which is creating a new system for University Ministries to manage and track students’ Community Life + Worship (CLW) credit.

Laws has used her musical talents as a piano accompanist for student recitals, vocalists and instrumentalists, as well as serving as a musician at her church. She is a principal chair in the trumpet section and devotional leader for SBU’s Wind Symphony, and a member of the Pep Band, Trumpet Ensemble and Brass Quintet. Laws also has performed at numerous functions on campus and assisted at the music booth during Welcome Week and campus visit events.

After having completed internships as a software engineer for the Federal Reserve Bank of Kansas City during the summers of 2020 and 2021, Laws is scheduled to work there again this summer. 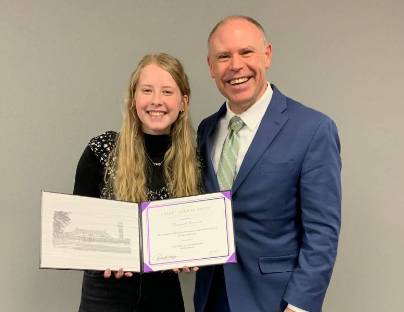 The Chaney Scholar Award is presented to one male and one female student who prove themselves to be exemplary in their academic endeavors and character, potential for professional development, and leadership in campus, church, and community activities.

Savannah Garrison, a junior nursing major from Springfield, Mo., is the female recipient of the Chaney Scholar Award. She received an excellence award in her Fundamentals of Nursing Practice course for clinical performance and carries a 4.0 GPA. Garrison has served as a worship leader for Chapel since December 2019 and volunteers as a tutor for students needing help in anatomy and physiology. She also leads study sessions for the new nursing student cohort. In addition to these volunteer efforts, Garrison hosted the Bolivar BSN program’s annual Friendsgiving celebration, spending her own money to buy prizes for a game to welcome and inspire the new students. Garrison also plans to use her nursing skills this summer as part of SBU’s mission team to Uganda.

Garrison is a member of The Crossing Church in Springfield and serves as the worship leader and children’s Vacation Bible School leader. 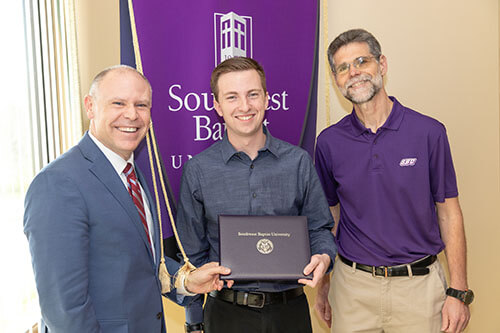 Andrew Eisenhour, a junior computer science and mathematics major with minors in cybersecurity and statistics from Springfield, Mo., is the male recipient of the Chaney Scholar Award. In the classroom, Eisenhour carries a 4.0 GPA and enjoys a challenge. He and a friend participated in an undergraduate mathematics research project in which Eisenhour designed programs that produced patterns and programs that collected and analyzed data. In addition, in two of his courses where students were required to put solutions on the board, Eisenhour put up at least twice as many as required. He has been a member of the successful Competitive Programming Club, as well as a member of the Apologetics Club and SBU Disc Golf Club.

Eisenhour has led Meyer Hall’s Tea Talk Bible studies and participated in a Bible study that used the book “Just Do Something.” He has accompanied vocalists on piano and has been a member of the Chapel Band. Eisenhour attends Jefferson Avenue Baptist Church in Springfield, where he has played cello and keyboard for the worship team while also being involved in and leading the college group. He also worked as a cabin staff member at the Christian summer camp Camp Conquest last summer.

About the scholarship founders

Stanley Dill ’55 was known to be exemplary, not only in scholarship but in character, campus leadership and Christian commitment. Dill was the student Life Beautiful Award recipient in 1955, the highest honor awarded to a student recognizing character, leadership ability and Christian commitment. He continued to distinguish himself after his time at SWBC by serving as a pastor and denominational leader at both the state and national levels.

Charles Chaney was a preacher, pastor, scholar and teacher, a church planter, mission coordinator and denominational leader for Southern Baptist churches and organizations at the state and national levels. Chaney pastored new churches in Morganfield and Oak Grove, Ky., and Palatine, Ill. In 1972, he began his executive work in home missions as an administrator and strategist in planting churches and growing new congregations. He served as Director of Church Extension for the Illinois Baptist State Association until 1981. He was a dean and then president of Southwest Baptist University from 1981-1988. He was Vice President of Extension for the Home Mission Board, SBC, in Atlanta from 1988-1997.