“While audiences are still being asked to mask for the performances, we are very excited to be able to have the actors unmasked this season,” said Jonathan Wehmeyer, director of theatre and assistant professor of theatre at SBU.

Each of the productions highlights a different opportunity for students and audience members alike.

SBU Theatre will open the season with “The Little Prince” by Antoine de Saint-Exupery at 7 p.m., Sept. 23-25 in the Davis-Newport Theater on the Bolivar campus. The production is adapted by Monica Flory and directed by Rebecca Rankin, assistant professor of theatre at SBU.

“We are excited to have the opportunity to work with playwright Monica Flory on ‘The Little Prince’ to adapt this work for our unique cast,” Wehmeyer said. “A moving story about a boy and the characters who teach him life lessons will use a variety of puppetry styles including classical Marionette, double-rod hand puppets and shadow puppets. 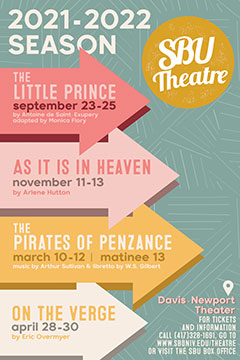 “We are thrilled to create an imaginative world of expression through puppetry.”

The remainder of the schedule includes:

Tickets range in price from $4-$10 and may be purchased at the Box Office in Jester Learning and Performance Center from 1-5 p.m., Monday-Friday, over the phone at (417) 328-1691 or online at www.sbuniv.edu/theatre.