SBU's Langford, Weber selected as "Most Influential Women" for 2021

BOLIVAR, Mo. – Dr. Allison Langford, vice president for strategic planning and initiatives at Southwest Baptist University, and Rebecca Weber, a 2012 SBU graduate and program director with CASA of Southwest Missouri, have been selected to Springfield Business Journal’s class of 2021 "Most Influential Women."

Langford and Weber are among the 20 honorees who will be recognized at SBJ’s Oct. 5 event. The honorees are recognized for improving the southwest Missouri business, civic and philanthropic communities.

"Dr. Allison Langford is a trusted colleague and friend to so many of us at Southwest Baptist University," said Dr. Brad Johnson, interim president at SBU. "It is extraordinarily fitting that the Springfield Business Journal is honoring her as one of the Most Influential Women of 2021. Dr. Langford is truly among the most talented and capable individuals with whom I have ever served. The University family celebrates the numerous accomplishments of Dr. Langford and are incredibly thankful for her service to SBU.

"Southwest Baptist University also celebrates the accomplishments of alumna Rebecca Weber and the significant honor of being named the SBJ’s 2021 Most Influential Women. Rebecca continues to make her alma mater proud as she leads and serves so capably. Congratulations, ‘Captain Springfield!’" 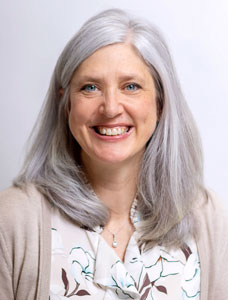 Langford, who also has served as the associate provost for teaching and learning, assistant provost and faculty member in the Clark Success Center, was the founding director of the Gordon and Judy Dutile Honors Program in 2005, as well as faculty member.

Langford said she was stunned by the “Most Influential Women” selection, while also humbled and excited about the honor.

"I am honored to be among this group of women," Langford said. "I am also glad to bring recognition to SBU and the opportunities provided to me over the past 18 years to be a person of influence.

"I pray each day that I will make a positive difference in the lives of the people around me, and to be recognized as an influential person is gratifying. It is also quite humbling. As a leader, I know I have the opportunity to influence, but leaders do not always use their influence in ways that truly benefit others. I make a lot of mistakes each day, but I hope that in the balance, the positive outweighs the negative, and people are inspired, supported, challenged, encouraged and pointed to Jesus."

Not only is there the SBU connection between Langford and Weber, there also is a Buffalo High School connection where Weber and fellow honoree Christie Love were students and Langford was a teacher.

"I got to know Christie and her family well, and I have kept up with her work and have been inspired by her commitment and passion," Langford said. "I also knew Rebecca as a student from Buffalo and at SBU. Although I did not teach her, she is good friends with Suzanne Powers (former SBU Career Services director), and we all ‘adopt’ each other's students, so I considered Rebecca one of my own as well. Rebecca also does amazing work, and it is an honor to be on the same list as those two women."

As a "Most Influential Women" selection, Langford is reminded of one of her favorite verses – Colossians 3:23-24: "Whatever you do, work heartily, as for the Lord and not for men, knowing that from the Lord you will receive the inheritance as your reward. You are serving the Lord Christ."

"This verse is a reminder for me to work with humility and to be motivated by the eternal rather than the temporal," Langford said. "Sometimes the Lord provides encouragement through earthly awards or other types of recognition. I am personally encouraged by receiving this honor, but I am also hopeful that the award will point people to the One who motivates me to be a positive influence – Jesus Christ." 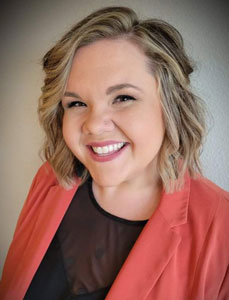 Weber, who earned her bachelor of science degree in psychology from SBU in 2012, has been working in the foster care system ever since graduation. She now is the program director for CASA (Court Appointed Special Advocates) of Southwest Missouri, after having held positions as a case manager, and a licensing and home study specialist.

While humbled to be selected to the 2021 class of the "Most Influential Women," Weber said the honor also is an important one.

"There are so many deserving leaders in the community who I consider world-changers," Weber said. "To receive this recognition means that people are beginning to notice the significant need of the foster care community and learning about ways they can impact children in foster care. That awareness is priceless to me.

"This honor is justification of the early mornings and late nights of work I have put in over the past 10 years, both professionally and personally, in the foster care system. I truly have my dream job at CASA and knowing every day that I have the opportunity to change the lives of children through advocacy, fuels my passion. I am thrilled that others are going to hear my plea to get involved through this avenue as well."

Weber also said she is honored to be selected alongside Langford and Love.

"I have been blessed to coordinate efforts with Christie Love in the Springfield area in our work to serve vulnerable children and families," Weber said. "She is an inspiration in her pursuit of Jesus. Dr. Langford has been a teacher and incredible example of integrity and grace during the time I have known her throughout high-school and during my time at SBU. To be named among these women is an honor in itself."

Weber hopes the recognition will encourage others to get involved with CASA.

"A Court Appointed Special Advocate is assigned to a child in foster care to ensure they have all of their needs met during their case," Weber said. "A CASA follows their assigned child through every change that may occur including foster home and school changes. This is truly an invaluable resource in the community that is changing the trajectory of children’s lives. I hope this award shines the light on how incredibly important our mission is.

"As believers, we are called to love through action. I am desperate to show others how to lead by example and put feet to their faith. Having been a foster and adoptive parent for the past seven years, I also hope others hear that you are never too young or too inexperienced to make a difference. If I would have never taken several leaps of faith throughout my journey, I am not sure I would be where I am today." 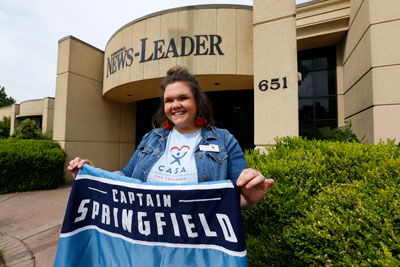 In addition to her recognition as one of the “Most Influential Women,” Weber was recently voted "Captain Springfield."

"Captain Springfield" nominations are made by community members who select someone they believe represents the third-largest city in Missouri well. Weber was nominated by colleagues at CASA and several individuals throughout the 417 area code.

Once the 16 nominations were received, the Springfield News-Leader held a virtual voting process. Through a knockout elimination process, the nominees were narrowed down each round by community votes.

Weber said she never expected to win as the others in the competition were "inspirational leaders throughout healthcare, the city and other deserving people."

"‘Captain Springfield’ is a role that embodies community spirit and brings about change," Weber said. "It is incredibly important to me that this role keeps highlighting ways everyday people are all making our city a better place through their work, kindness and perseverance. I am proud people have put trust in me to carry on the tradition over the next year."

Weber’s goals for the next year are to highlight heroes in the foster care system including foster parents, CASA volunteers and professionals in the system.

"These are the people who should be getting the recognition, but often their jobs and roles are thankless and difficult," Weber said. "I think anyone who is investing their time and heart into a child in need deserves much more than they receive."

Weber also will be starting a "Conversations with Captain" Facebook Live series through the CASA of Southwest Missouri Facebook page. During these events, she will be interviewing child welfare experts to share information and discuss various ways to get involved.

"People are very surprised to know that for just five hours a month, they can volunteer as a Court Appointed Special Advocate," Weber said. "Your role as a volunteer is to build a relationship with that child, get to know their case and make recommendations to a judge about what is in their best interest. You get the opportunity to give a child a voice. We need our faith community to respond and show their faith through action."