The event marked the beginning of Homecoming festivities and also featured the presentation of the 2021 Homecoming court. Due to the COVID-19 pandemic interrupting last year’s Homecoming activities, the 2020 Life Service Award and Edwin Lightfoot Distinguished Alumni Award recipients were recognized along with the 2021 honorees.

“There are more than 36,000 Southwest Baptist University alumni who are serving and leading around the world in every sphere of society – from healthcare to finance, from the pulpit to the halls of justice, from social work to the legislature, from the classroom to the boardroom, and everywhere in between – each on mission to know Christ and make Him known,” SBU President Dr. Rick Melson said.

“The definition of homecoming is to return home. As we come together this weekend to celebrate what the Lord is doing here, may we see what He has done in the past, the present and the future here at SBU. It is my distinct honor to say, ‘Welcome home, Bearcat family. Welcome home.’

“As we gather this morning, we welcome those to give honor to where honor is due. The alumni receiving the Life Service Awards today are people whose lives exemplify SBU ideals. This is the highest honor given to alumni by the university.” 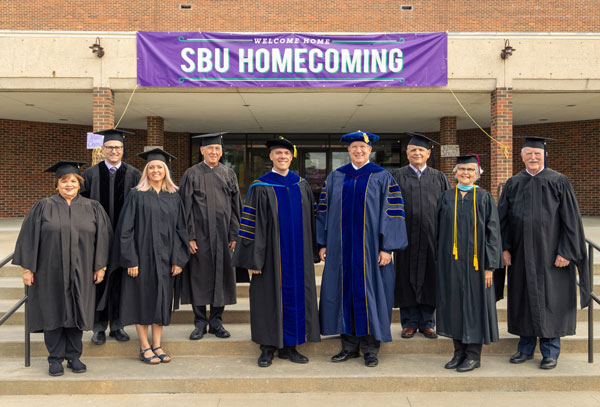 The National Alumni Association Board presents the Edwin Lightfoot Distinguished Alumni Award annually to an alumnus or alumna who demonstrates the ideals personified by the late Edwin Lightfoot ’40. The award criteria include alumni leadership in the University, dedication to the education and welfare of youth and demonstrated support for SBU.

Robert (Bob) Glidwell ’86 – 2020 recipient: Robert (Bob) Glidwell began his studies at SWBC in 1969, eventually earning his B.A. in music in 1986 while also working for the University. For his final 36 years at SBU, Glidwell served as the director of SBU’s Physical Plant. He was a member of the Association of Physical Plant Administrators and the Missouri Association of Physical Plant Administrators. Glidwell, a Life Beautiful Award recipient in 2013, is a member of First Baptist Church of Bolivar and is a charter member of the church orchestra. He also taught Sunday school, worked with children’s music groups for several years and served on the building and grounds committees.

“I made many friends of students, faculty and staff that I had contact with over the years, especially the Physical Plant employees who became more like family to me,” Glidwell said. “I did not have an outstanding life like many celebrities and great men throughout history, but I look back at these experiences and say, ‘I lived a good life and I was a good man because of all the blessings I received from God and all the people I met along the way.”

Jack Tuckness ’68 – 2021 recipient: Jack Tuckness has served as a speech and debate coach for 36 years, 23 of those at Central High School in Springfield. He ranks second nationally with 576,325 coach’s points, while Central ranks fourth. Tuckness was inducted into the National Speech & Debate Hall of Fame and was awarded the Seventh Diamond Key in 2018. Tuckness earned his B.A. in speech with a minor in English from SWBC and a master of education from Drury University. He is a member of South Haven Baptist Church in Springfield, where he serves as a Sunday school teacher and has served as deacon, youth director and youth choir director.

“When I think back to my time at Southwest Baptist as a student, from ’64-’68, I am still amazed at the amount of talent that I had as classmates,” Tuckness said. “Upon graduation, so many of them went on to be successful in almost every area imaginable – in business, in ministry, in music, pastoral – everything that you can imagine. When I think of them and how many there were and all that they’ve done and all the success that they had that pointed back to this university, what it meant to them and how it helped them, I am truly humbled to be here today. But, I am also honored. This is maybe the greatest honor that I have ever received, and I want to thank the university for doing so.”

Inspired by the Life Beautiful Award presented each year to one male and one female graduate, President John Dowdy suggested to the Southwest Baptist College Board of Trustees in 1955 that the Life Service Award be given annually to graduates whose lives have exemplified the principles which are upheld at Southwest. The award is the highest recognition that the University can bestow upon an alumnus or alumna.

Jane Hood ’73: For 18 years, Jane Hood worked for the Missouri Department of Economic Development as an International Trade Specialist and Project Manager. Hood also has worked as a social worker for the Missouri Division of Family Services the past 10 years, and has served part time as the associate director of Southwest Missouri Council of Governments at Missouri State University for the last 12 years. Hood is a member of the Missouri Economic Development Council, RMI, Inc., Board of Directors, and the Springfield Convention and Visitors Bureau. Hood earned bachelor of arts (B.A.) degrees in psychology and sociology from Southwest Baptist College (SWBC). She is a member of Second Baptist Church in Springfield, where she serves as a nursery volunteer and as a member of the choir and choir council.

“I remember 50-plus years ago, sitting in Chapel, and seeing all of those before me receive this honor,” Hood said. “I am humbled to now be a part of those who inspired me from this wonderful institution – a place that helped shape my thinking, taught me to stand firm in my Christian faith, taught me confidence and showed me the importance of giving back to others. Thank you, Southwest Baptist University, for this distinguished honor and for continuing to instill today’s young people with the Christian values as they prepare to go out in the world.”

Teresa Young ’82: Teresa Young worked in the Springfield Public Schools district for 31 years as an elementary and middle school librarian and classroom teacher, earning the librarian of the year award twice, as well as receiving state-wide recognition twice as the Bright Idea Award winner. Young has been a supporter of nonprofits in the Springfield area, including Pregnancy Care Center and Newborns in Need. She earned her associate of science degree from SBU, her bachelor of science degree from Cameron University and master of science from Missouri State University. Young is a member of Second Baptist Church in Springfield, where she has worked with the youth department on mission trips to St. Louis, and has taught sixth-grade girls.

“I, too, lived an ordinary life,” Young said. “I got up and did my job. I looked forward to being with kids all day, especially middle school kids.

Dr. William (Bill) Hooper ’51 (awarded posthumously): Dr. William (Bill) Hooper earned his certificate from SWBC, his B.A. from William Jewell College, master of arts from the University of Iowa and his Ph.D. from Vanderbilt University. Among his many places of employment, Hooper served as professor of music at SWBC from 1956-1960 and then as dean and professor of music at SBU from 1983-1998. He served as a pastor and worship pastor at several churches in the United States, including as the senior adult pastor of First Baptist Church in Bolivar. He is the author of 10 books and wrote many instrumental and choral compositions that were published by Concordia Press, Broadman Press, Carl Fischer and Word Music.

“Southwest Baptist University has been a part of the Hooper family life for almost 100 years,” said Nathan Hooper ’21, who accepted the award on behalf of his grandfather, Dr. William Hooper. “During all of his work, he was still teaching online correspondence courses at the age of 89, up until this past March when he passed away – two months before I graduated with my cybersecurity degree.

“Dr. William Hooper believed in a good education and completing your studies. He said that is a building block for your future. I would not have completed my degree if he had not wholeheartedly believed in SBU. He did everything from his heart, and his heart was for the Lord.”

Wayne Garrison ’74: Wayne Garrison earned his bachelor of music from SWBC and a master of music from the University of Illinois. Garrison retired as minister of music after 38 years at Boulevard Baptist Church in Springfield, Mo., while also serving in the youth, education and administration areas. Garrison, who received the 2006 SBU Casebolt Award for Excellence in Church Music, just completed two years as interim music minister at First Baptist Church of Sedalia, Mo. He also has served as the director of the Missouri Music Men (seven years), as past Missouri Baptist Convention Worship consultant, and for several years with the Greene County Baptist Association as camp director and on the Baptist Hill Assembly Board.

“I am very honored to receive this recognition today,” Garrison said. “Southwest Baptist has always been special to me. Like a church, it is the people, not the place that make it special. It was here that I found a lot of things – I found an education; I found friends; I found love; I found Miss Southwest, Martha Bundick, and she’s been my wife now for 47 years; and I found direction for my life.

“We are being honored here today for the works that we have done and the lives we have been given. And you, in turn, have a life ahead of you. Ephesians 2:8-9 says, ‘For by grace you have been saved through faith and not of yourselves. It is the gift of God, not of works, lest any man should boast.’ Verse 10 says, ‘For we are His workmanship, created in Christ Jesus for good works,’ which God prepared beforehand that we should walk in them.

Matthew Stinson ’97 and Chandra Stinson ’95, ’99: Matthew Stinson has worked at Jordan Valley Community Health Center since 2007 and serves as executive vice president, as well as in several other areas in the Springfield community and the state. He serves as executive board member of the Child Advocacy Center, medical director of the Child Advocacy Center, counselor at Missouri State Medical Association and board member of Home-State Health. He also has been honored as a Congressional Coalition of Angels in Adoption Recipient and Springfield Business Journal’s 2011 Clinic Administrators Healthcare Champion. Matthew earned his B.S. in chemistry from SBU, while Chandra earned B.S. degrees in elementary education and music education, as well as her master of education from SBU. The Stinsons are members of Second Baptist Church in Springfield, where they serve as ABF small group leaders. They have 11 children and have previously served as adoption and foster group directors at Second Baptist.

“This was a very unexpected award, yet it was very encouraging,” Chandra Stinson said. “Since receiving this award, we have discussed several times, ‘Why, why us? What about us does God on our journey want to highlight?’”

“Our journey started here at SBU. We met here; we had great mentors here. These people started us in understanding that faith, reason and service do connect through Christ,” Matthew Stinson said.

“Truly, we have no outstanding characteristics to recognize,” Chandra said. “Our journey to where we are is based on a simple willingness to say, ‘yes’ – yes, to the Lord in whatever circumstances He allows, and a persistence to see His calling through to the end.

“Without the support of the body of Christ, our family, our friends and our church, we wouldn’t be here today. As messy and frustrating as it can be to be in relationships with others, we will never see the fullness of God without the body.”

For more information and listing of events for SBU Homecoming, go to advance.SBUniv.edu/Homecoming or contact the Office of Alumni Engagement at (417) 328-1806.