BOLIVAR, Mo. – The Southwest Baptist University Speaking Bearcats opened their 2019-2020 traveling season with a pair of overall sweepstakes victories in the Missouri Mule/Dale Carnegie swing tournament on Oct. 18 and 20, and the Cowtown Classic on Oct. 25-26.

The Speaking Bearcats captured the tournament championship in overall sweepstakes in the Missouri Mule half of the swing, second place in individual event sweepstakes, and were named the top Pi Kappa Delta chapter at the tournament. A “swing” tournament features two back-to-back competitions during the same weekend. 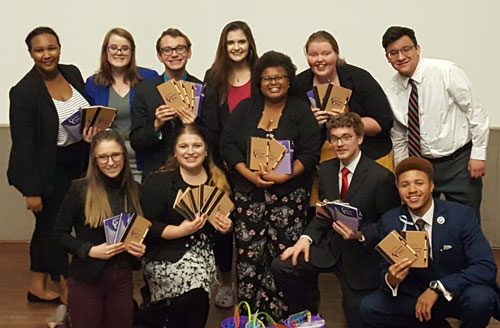 • Dramatic interpretation: Mitchell Huston finished second, while he and his duo partner Mariah Gilmore were Tournament Champions in the event.

• Persuasion: The Speaking Bearcats took all three of the top spots in the event. Kadie Thomas was Tournament Champion, followed by teammates Evan Kirksey in second and Breanna Prater in third.

The team is taking a few weeks off to rest up and practice before hitting the road again in early December for the “Gateway Swing” in St. Louis at Webster University. For more information about the Speaking Bearcats, please contact Director of Forensics Dr. David Bailey at dbailey@SBUniv.edu.