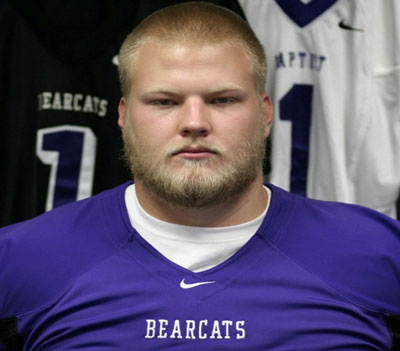 Southwest Baptist University mourns the passing of Stephen Carr ’15, who died Saturday, Dec. 7, in the line of duty as a police officer in Fayetteville, Ark.

“While I did not know Stephen, I am grieved by the loss of a Bearcat, especially so unexpectedly,” said SBU President Dr. Eric A. Turner. “The SBU family is united in prayer for Stephen’s family during this difficult time.”

According to news reports, Carr worked for the Fayetteville Police Department since April 2017. The department described him as a hero, serving the community with dedication and professionalism.

Carr graduated in May 2015 with a degree in Economics/Finance. After graduation, he initially went to work for Sam’s Club as a buyer, according to his academic advisor, Dr. Troy Bethards, Dean of the Robert W. Plaster College of Business and Computer Science.

“Stephen was a sharp student and very engaged in his academic experience,” Bethards said. “He took his academics as seriously as his time in football. Whatever he pursued, he was dedicated and did to the best of his ability. We are praying for his family as they grieve Stephen’s passing.”

“Stephen came in as a highly recruited offensive lineman not just because of his ability, but because of his integrity and character,” SBU Head Football Coach Robert Clardy said. “He faced adversity with injuries in his first couple of years which sidelined him as a player and led him to coach. He was a wonderful young man who worked hard to impact others on our campus and in our community.”