When the National Basketball Association announced on March 11 it would be suspending its season indefinitely, that appeared to be the domino that set the rest of the sports world’s schedules in motion as organizations began to postpone or cancel seasons and events. 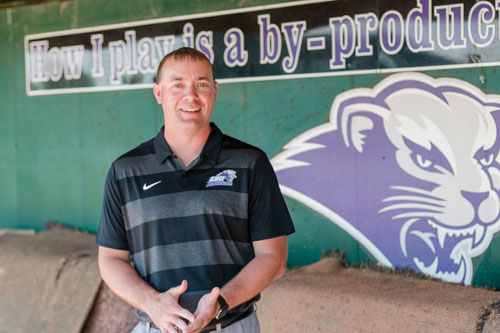 “When I talk to people about the COVID-19 situation, most of them had an ‘aha’ moment when they realized this was a lot more serious than they had imagined,” said Mike Pitts ’85, ’10, athletic director at SBU. “My own ‘aha’ moment was on Wednesday, March 11. I was with my wife and best friend at a local restaurant at about 8:30 in the evening when I saw on Twitter that the NBA had canceled its season. I couldn’t believe it.

“That was only a little over three months ago, but it seems like three years ago. Very soon after that announcement, many other sports leagues and associations started canceling, which included the NCAA contests.”

On March 12, the NCAA canceled the men’s and women’s basketball championships and SBU decided to suspend activities for that weekend, while the Great Lakes Valley Conference announced on March 13 it was suspending all intercollegiate athletic activities and canceling the 2020 GLVC Championships.

“When we met the Wednesday before Spring Break, we had talked to the team,” said Chris Martin ’07, ’09, SBU head baseball coach and associate athletic director of operations. “When I came to practice that day, I kind of thought we were probably in a little bit of trouble with our season. So, we talked to the guys at the end of practice that day and I addressed the situation and said, ‘Hey, we’re going to get impacted by this. I don’t know to what degree, but we’re going to be impacted by it.'

“Thursday, we came to work and we had Illinois-Springfield coming to town that weekend. They were in St. Louis practicing, and Mike Pitts and Dr. Eric Turner (SBU president) met and decided to suspend activities for SBU for that weekend. We were able to get Springfield to turn around and go home, and we had a meeting that afternoon with the guys. We kind of figured it was over at that point. We hugged and that was it. That was the last time I saw the guys.”

At that same time, SBU’s men’s and women’s indoor track and field teams were competing at the NCAA National Championships in Birmingham, Ala., when they learned that not only were the indoor championships canceled, but so was their entire outdoor spring season.

“We were all getting ready to go out and have our pre-race meal on Thursday when I received the notification,” said Corey McElhaney ’06, ’12, SBU head track and field and cross country coach. “We immediately packed up and started toward Bolivar. Qualifying for Nationals is a big accomplishment, so on the way home, we tried to stop and have a nice meal and let the team enjoy each other’s company in the midst of what was going on. We knew it would be difficult missing out on Nationals. With it being Spring Break, once we arrived in Bolivar, everyone said their goodbyes and went their separate ways.”

Of the spring sports in session, seasons were shut down beginning with men’s and women’s tennis on March 8. The tennis programs had played eight of their 21 scheduled matches, baseball had played 18 of its 50 games, softball had competed in 19 of its 55 games and track and field had its entire spring season wiped out.

For most of the 45 senior athletes, their careers were over, though the NCAA ruled that Division II spring athletes could return for one more season, if they so chose.

“We tried to make sure we took care of them, if they wanted to come back, if they didn't, if they were graduating, etc.,” Martin said of his 17 seniors. “That was the first thought, that process to help those guys out, and then just work through the next steps as far as scheduling.”

McElhaney said he had a hard time sharing the news with his athletes, 17 of whom were seniors.

“It was devastating and very difficult to tell the team,” McElhaney said. “Each one of them had worked extremely hard and earned the opportunity to compete for their university on the national stage. To have that taken away was heartbreaking. There were a lot of tears shed and, to be honest, I told them I didn't have a good explanation or answer.

“I have always believed things happen for a reason and a bigger purpose than we can comprehend. I just tried to help them see that side of things, but was struggling myself. I relied on faith in knowing God had a plan.”

Not only were athletes faced with their seasons coming to a halt, they also were faced with finishing their academic semester at home online.

“Traditionally, our program’s been strong in the classroom,” Martin said. “This was our 10th straight semester over 3.0 – we ended up with a 3.24 as a team. I felt like the guys really did a good job working with the excellent faculty and staff we have here and took care of business, so we’re really proud of the work they did. While they were away, they probably had more time to focus on what they were doing without baseball, but I thought they did an outstanding job taking care of their academics.”

“One of the best things about SBU is the atmosphere and loving faculty and staff,” McElhaney said. “I think the team really missed that aspect going online and will appreciate in-person classes more now.”

Pitts said what makes this situation unique is “there is still so much we do not know,” and noted that SBU’s coaches have been flexible the past three months.

“I have 5-6 meetings each week with different stakeholders, who are trying to unwind this and think about the future,” Pitts said. “I think back to when this all hit us in mid-March; it is astonishing to think about what we did not know at that time. We did our best to keep our programs updated with information as we received it.

“I know this has been incredibly difficult for our coaches and teams, but they have responded like champions.”

With every disappointment, there can always be something learned from those difficult times – especially in sports.

“This pandemic was something that was out of our control,” Martin said. “For us, there’s going to be difficulties in life, and baseball, I think, can prepare you so much for life because there’s so many things you can’t control. But, you can’t let that affect the way you prepare, the way you treat people.

“Hopefully, our players see this was a great teaching point. If we can get through this with a great attitude and perseverance, we can attack a lot of things when we get out in life. That’s really the point of sports.”

McElhaney hopes his athletes learn that life is special and that they will take advantage of relationships they have and blessings they receive.

“It’s so easy to take all the blessings we get on a daily basis for granted,” McElhaney said. “It is also very easy to get entangled in all the negatives and stress in life and start feeling sorry for ourselves. Romans 5 serves as a good reminder that even through all our trials we can have hope in God and his love for us.”

In the end, Pitts said, everything is really about relationships.

“I know that going through hard things together is a great way to strengthen relationships,” Pitts said. “I don’t know that we will ever get back to where we were, but I do think we can come out of this closer and stronger and more prepared for unexpected things that life throws at us in the future.”