As a young girl, Meilani Conley ’08 developed an interest in computers. And, it actually began when she was attempting to fix her dad’s computer.

“I was on the computer trying to figure something out, and I didn't understand it, so I was really frustrated,” said Conley, an instructor of computer and information science at Southwest Baptist University. “I said, ‘I’m tired of being frustrated about not knowing what to do,’ so that was what interested me in computers.”

Her drive continued when her interests and abilities were challenged.

“When I was in eighth grade, all of the eighth-graders were supposed to tell the teacher what we wanted to do in the future and why,” Conley said. “I said, ‘I want to do something with computing. I don’t know what that means, but hopefully, something in that field.’

“I was told that since I was a woman and a minority, that would not be a possibility. I set out from that day forward to prove that person wrong and have successfully done so. That’s what led me into that field.”

On Feb. 11, the United Nations hosted the International Day of Women and Girls in Science, and SBU joined by celebrating its women – both faculty and students – working and studying in the Science, Technology, Engineering, and Mathematics (STEM) fields.

Conley says it is crucial to have a diverse perspective, no matter the field.

“I think that there’s a creativity that comes with women, that men maybe have a different perspective on,” Conley said. “I think it’s important for us to take advantage of that. That’s one of the reasons why I love this field — because it is math-based, and there are no favorites in math. The numbers are just the numbers, and you can go anywhere and do whatever you want with it.” 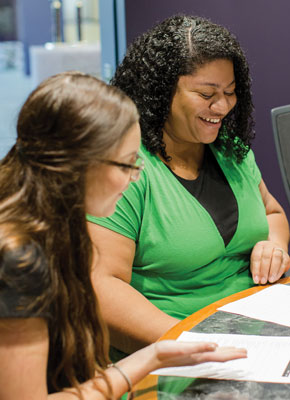 Even though the global numbers may show otherwise, Conley says she has seen growth in her department, both as a student and a teacher at SBU.

“When I started in this program at SBU, I was the only female in my class, so that was a little daunting,” Conley said. “But, we’ve grown our department significantly, and about 25 percent or more are women. It’s really exciting to see that growth just within our computer information science department, which is rare, because it’s higher than the national average of women in technology, specifically. I’ve seen the shift to more women being exposed to computer science at a younger age.”

Before she began teaching at SBU, Conley was out in the field, having worked as an IT manager, software administrator, and system engineer. Through these experiences, she has been able to pass along that knowledge to her students.

“I absolutely love being able to integrate my practical industry knowledge into the classroom,” Conley said. “I think it’s important to have an academic perspective as well as, ‘hey, this is what really happens in the industry. Here’s a business term, but this is how it’s used in the real world.’ That’s been one of my aspirations is to continue to integrate industry concepts into an academic environment.”

Conley isn't finished learning, either, as she is currently pursuing a doctorate degree.

“I’m working on my doctorate in Information Assurance, with a focus on cybersecurity; I want to extend and help build upon our cybersecurity major,” Conley said.

And, she loves the freedom of being able to integrate faith and academics.

“I always wanted to combine technology and my faith,” Conley said. “I didn't know what that looked like when I was in college, but God has brought that full-circle now, and all my experiences brought me to this place. You don’t have to sacrifice your academic rigor for your faith. They go together perfectly. And, that’s how God designed it.”